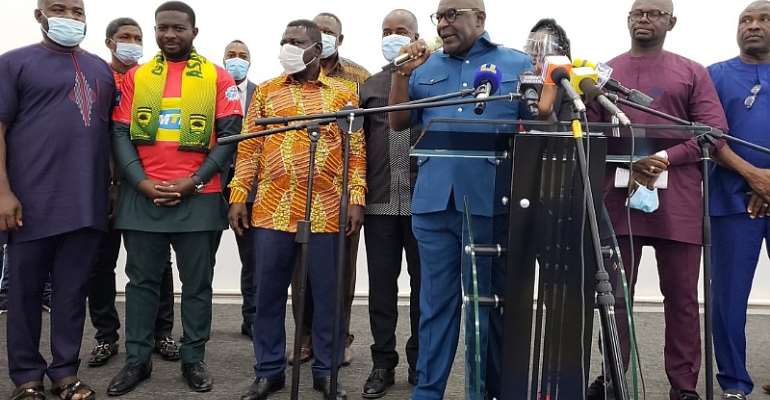 The official announcement of Nana Yaw Amponsah (NYA) as Asante Kotoko’s new Chief Executive Officer (CEO) for the next three years in Kumasi, marked the first important step by the Kwame Kyei-led Board of Directors to fulfil the “ambitious task” handed them to “rebuild the Kotoko brand not only for its performance on the sporting field but as a viable economic entity”.

The Board has been working since their appointment on May 28, 2020, to ensure, Kotoko get a managerial head whose knowledge and experience will be the platform on which we will ride on to be competitive on and off the pitch – locally and on the international scene. NYA is the young man thrusted onto the club’s hot seat with loads of expectation. He is the 18th Kotoko leader in 40 years if we collectively count the Chairmen and CEOs the club has had since the 1979/80s.

NYA holds a Bachelor of Arts Degree in Psychology and Political Science from the University of Ghana, Legon, plus a Master’s Degree in Sports Law and Practice from the Leicester DE Monort University, UK. Between 2008 to 2018, he was a Licensed Player Agent/Intermediary; transferring over 50 players from Ghana and 100s globally. NYA has considerably good expertise in commercial, ethical and legal as aspects of the game.

“He is a guy great of ideas. He looks a man of action” former Board member, Ambassador, Kabral Blay Amihere told the media in June when news of NYA’s appointment was first broke. NYA comes in as the second Kotoko leader (after Dr K. K. Sarpong) to have shown a verifiable blueprint for the club’s development in the last decade. He has vibrant ideas to energise Kotoko for action at the administrative and technical level of the game. He exhibited his quality at Phar Rangers and indeed on the GFA presidential campaign trail last year.

This is not GFA presidential campaign platform. It is Kotoko – a subgroup of Ghana football which has diverse challenges that could either make its leader a scorned or an idolised god. NYA must maintain his usual calm, confident and assertive posture. He is intelligent and smart. He will have to consult properly though and be decisive while engaging his publics purposefully. Effective planning, identifying sustainable means of financing, patiently and diligently implementing what has been planned, winning matches – being able to drive the massive support base of Kotoko to accept his vision are some sure ways to excel at the club.

How NYA sets up his managerial structure, who he appoints to assist him to execute his mandate, how he goes about his work, the output of his managers, the team’s overall performance on and off the field; his relationship with fans and the Board of Directors will offer early yet insightful pointers to the exact direction the club may chart. Work at Kotoko is made easier or difficult by the team’s performance. That has been the notion. While this is true, fans must constantly be reminded that results will not always go our way. Management’s plans for the club will also take time to mature.