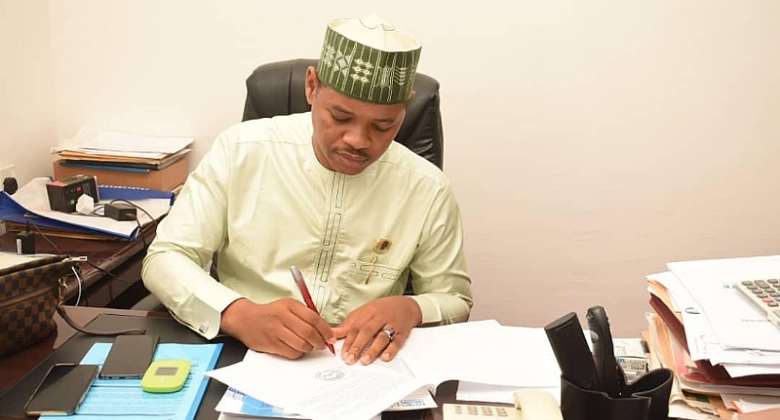 Famous Nigeria Comedian, Mr. Obinna Simon, popularly known as MC Tagwaye, has been honoured with a Honourary Doctorate Degree from the prestigious and international Les Cours Sonou University Institute in Benin Republic. MC Tagwaye was presented with the Letter of Award, few hours ago by the Sarkin Arewa Students West Africa in Abuja.

Speaking with Abuja Press, few hours after he received the Letter of Award, Mr. Obinna Simon, stage named MC Tagawaye noted that, it was indeed another star that has been added it him. He further expressed appreciation to Sarkin Arewa Students West Africa, for the recognition and humble honour.

He says, "I am humbled by this honour, and on behalf of my fans, I say a very big thank you and we await 24th October for the most anticipated 2020". MC Tagwaye did also thank the palace of Sarkin Arewa Students West Africa, for standing in the gap to make the humble and prestigious recognition a reality.

MC Tagwaye however concluded by seeking the grace of God to remain relevant and useful to the course of advancing humanity across Africa, he says in native Hausa language, "Allah Shi is zamanin sarki Ameen". Over the years, MC Tagwaye has continued to receive reputable awards and recognition, both at national and international levels. He remains uncontested and about the most humourous comedian, known for mimicking the Nigeria's President, Muhammadu Buhari.

He is the Host of Throne Of Lafta with Tagwaye Live Comedy Show, held annually in the Federal Capital Territory and known to have always recorded overwhelming outcomes, especially with the presence of notable personalities in Nigeria and across Africa. The Katsina State born, but indigenously from Anambra state has remained focused, devoted and commited to exploring creative opportunities both in the showbiz and Enterpreneurial Industry.

'A lot of idiots will occupy political positions if money la...
4 minutes ago

Proper management of natural resources will lead us to econo...
15 minutes ago