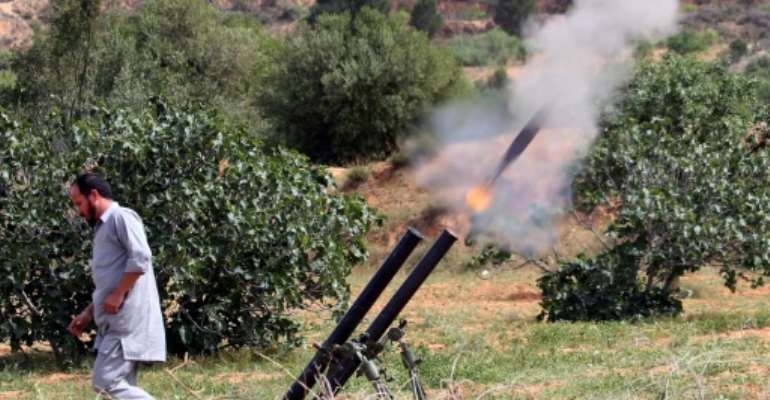 A fighter with Libya's UN-recognised Government of National Accord (GNA) fires rockets towards the city of Tarhuna, southwest of the capital Tripoli, held by the forces of the strongman Khalifa Haftar. By Mahmud TURKIA (AFP)

The UN mission in Libya has urged warring parties to resume military talks that were launched in Geneva in January aimed at achieving a lasting ceasefire.

The call came after eastern-based strongman Khalifa Haftar declared a unilateral truce, rejected by the UN-recognised Government of National Accord.

Pro-Haftar forces have been battling to seize the capital Tripoli from the GNA since April 2019.

Two civilians were killed and two other wounded Friday as rockets struck the Zenata district south of the capital, the GNA said.

The United Nations Support Mission in Libya (UNSMIL), in a statement late Thursday, urged the rivals to "immediately halt all military operations and resume the 5+5 Joint Military Commission talks -- on a virtual basis, if needed" because of the coronavirus.

A military commission comprising five GNA loyalists and five Haftar delegates held talks in January but the dialogue was suspended after a second meeting the next month.

A January ceasefire brokered by Turkey and Russia has been repeatedly violated.

UNSMIL urged "all parties to refrain from any provocative acts or statements that threaten the prospects for a genuine truce and its sustainability".

"This includes attempts to use periods of calm by one side or the other to reinforce their position," it said.

Haftar's camp said Wednesday it would cease hostilities for the Muslim holy month of Ramadan in response to international calls for a truce.

The move came after several setbacks for his forces in the past weeks.

The GNA said Thursday it did not trust Haftar and that any ceasefire "needs to have international safeguards and mechanisms" to monitor its implementation and violations.

World leaders at a Berlin meeting in January committed to ending foreign meddling and to upholding a 2011 weapons embargo, but the UN has since warned that both sides have continued to receive arms and fighters.

UNSMIL on Thursday called on "member states who are directly fuelling the conflict through their provision of weapons and mercenaries and the international community as a whole to use their influence to respect and enforce the arms embargo".

The battle for Tripoli that has left hundreds dead, including dozens of civilians, and more than 200,000 displaced.

Libya has been in chaos since the 2011 overthrow of longtime dictator Moamer Kadhafi.