Reports Of Alima Mahama Being Chased Out Are Total Fabrication--Group 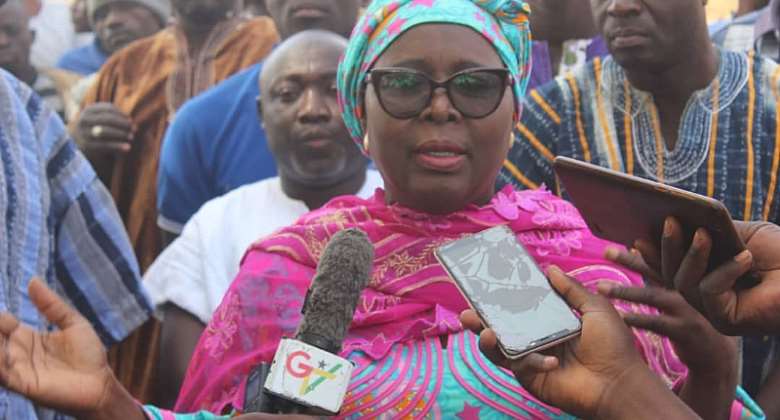 A group calling itself Patriotic Communicators Front of the North East Region has refuted reports in the media that the Member of Parliament (MP) for Gambaga-Nalerigu constituency, Hajia Alima Mahama was chased out of Dagbiriboari, a community in the constituency by some aggrieved members of the New Patriotic Party (NPP) during a campaign trail.

Hajia Alima who is the Minister of Local Government and Rural Development is reported to have visited the community on Wednesday, April 22 with some leadership of the party to interact with the delegates ahead of the primaries as well as donate some items to the residents to help in the fight against the COVID 19 when the said incident happened.

The report claimed that the MP was hooted at and chased out of the community by some aggrieved members the NPP for not fulfilling her promises.

But, the group has refuted the reports and accused the opposition political parties of spreading propaganda, insisting that the MP and her team had a successful meeting with the delegates.

A statement signed by a leader of the group, Mr. Simon Suayam described the report " as malicious and desperate attempt to create bad press for the hard-working MP".

The statement said the people of Nalerigu-Gambaga were rather proud and happy of the sterling performances of the MP who have initiated numerous development interventions in the constituency.

The statement listed some major achievements of Hajia Alima Mahama including the construction of three new Senior High School (SHSs) in Sakogu, Langbinsi and Gbintiri, Gambaga and Nalerigu township roads, the construction of Gbintiri road which is fast progressing, seed capital for over 120 women groups and provision of street lights in some major towns in the constituency.

It added that Dagbiriboari, the community where it was alleged that the MP was hooted at has also benefited from a number of projects including a health facility that was in use.

The statement, therefore, appealed to the general public to disregard the said reports as it was mere propaganda aimed at giving her a bad press.

Latest Photo Reports
Catch up with all the political quotes from our politicians.
Advertise here
More Rejoinder
ModernGhana Links
RE: 1.6 Million “Left Behind”: Errors in Ghana 2021 PHC report “exonerate” U.S. Census Bureau
Re: Bawumia's Call On John Mahama To Convert, Hypocritical, Does He Intend To Convert Into Christianity For Visiting Churches?
Rejoinder: Election 2024: Greed and selfishness may rock the NPP’s boat into opposition
Re: ATAG and Innovative Teachers Secure an Injunction on the Distribution of the Laptops
RE: Bagbin Becoming Too Much Of An Activist
RE: All Ashanti lands belong to Otumfuo Osei Tutu II with all other Ashanti chiefs being simply caretakers to the lands they occupy and with no family-owning lands in Ashanti
Rejoinder: Ghanaian man asking Nana Addo to fix the country in Germany allegedly deported
RE: TESCON-UEW to demonstrate on the day of SRC elections
Re: The Archbishop Of The Catholic Archdiocese Of Kumasi Makes A Scandalous Decision
TOP STORIES