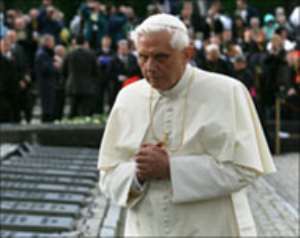 The pope has visited Auschwitz a day after Poland's grand rabbi was attacked and blamed the assault in part on Poland's growing far-right.

German-born Pope Benedict XVI led a ceremony of remembrance and met survivors at the camp during the last event of his four-day visit to Poland on Sunday.

He told journalists the attack on him in a Warsaw street on Saturday was an act of anti-Semitism and placed part of the blame on the entry of a far-right party into Poland's coalition government.

"When you let a right-wing party into the coalition government, that empowers nationalists and those who run around shouting unpleasant things," he said.

Tomasz Sklodowski, an interior ministry spokesman, said: "The rabbi, who was in the street, was suddenly pushed by a young man, but he was not injured."

Earlier this month, the far-right League of Polish Families (LPR) entered government alongside the conservative Law and Justice (PiS) party and the populist Samoobrona party.

Meanwhile, in an interview with Germany's Der Spiegel magazine, Mahmoud Ahmadinejad, the Iranian president, told Germans they should no longer allow themselves to be held prisoner by a sense of guilt over the Holocaust and was still considering travelling to Germany for the World Cup football tournament.

"I believe the German people are prisoners of the Holocaust. More than 60 million were killed in World War Two... The question is: Why is it that only Jews are at the centre of attention?," he said in the interview published on Sunday.

"How long is this going to go on?" How long will the German people be held hostage to the Zionists?

"Why should you feel obligated to the Zionists? You've paid reparations for 60 years and will have to pay for another 100 years."

Angela Merkel, the German chancellor, and other leaders have said his previous remarks questioning whether the Holocaust happened were unacceptable. Denying the Holocaust is a crime in Germany punishable with a prison term of up to five years.

Poland's Nazi German occupiers murdered more than 1.1 million people at Auschwitz-Birkenau - the biggest and most efficient of the Nazis' killing factories - most of them Jews, but also gypsies, Soviet prisoners of war, Polish political prisoners and members of the clergy.