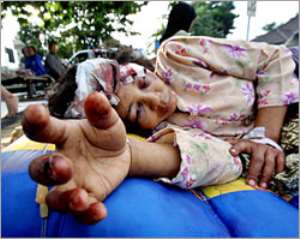 The Indonesian government has declared a state of emergency after a quake killed more than 4,600 people and injured 20,000 on the island of Java.

Rescue workers raced against time on Monday in the hope of finding survivors under the debris of razed homes.

Some 35,000 buildings around the city of Yogyakarta were reduced to rubble when a 6.3-magnitude earthquake struck at dawn on Saturday.

After a cabinet meeting late on Sunday, Jusuf Kalla, the vice-president, said the emergency period would last three months and the government aimed to complete "reconstruction and rehabilitation" within a year.

"We will have an emergency period for three months - May till August. The objectives are providing food, healthcare and shelter," he said.

"The funds needed are about 1 trillion rupiah ($100 million) ... for repairing homes and facilitating people's needs. This figure can change. It comes from the state budget and international aid," the vice-president added.

An estimated 35,000 homes and buildings had been destroyed and 50,000 people needed help, Kalla said, adding that the quake had destroyed power facilities worth 200 billion rupiah.

Rescue efforts have been hampered by frequent power cuts and heavy rain.

Meanwhile, hospitals remain clogged with the wounded, some lying on plastic sheets or newspapers, others hooked to intravenous drips hanging from trees.

"There are not enough nurses or doctors to cope."

Tens of thousands spent the night without shelter, although aid is beginning to arrive in Yogyakarta province and the town of Bantul, where more than 2,400 people were killed and 80% of the homes were destroyed.

Several aftershocks shook the region, and many residents did not return to their homes.

The affected area is about 25km from the Mount Merapi volcano that has been emitting molten lava for the past two weeks. Thousands had already been staying in emergency shelters amid fears of an eruption.

Susilo Bambang Yudhoyono, the Indonesian president, visited the disaster area and ordered the military to evacuate victims as soon as possible.

The national government in Jakarta, 400km from Yogyakarta, has put aside $5.5 million for relief operations.

The quake hit the island of Java
on Saturday

The International Federation of Red Cross and Red Crescent societies issued an emergency appeal on Sunday for nearly $10 million aid as relief agencies and foreign governments pledged their support.

Unicef said it was sending staff, thousands of tents, tarpaulins, and lanterns, as well as water supply equipment.

Australia offered $2.27 million for emergency food, shelter and medical supplies, China offered $2 million and extra help as needed and the US pledged $2.5 million in initial aid.