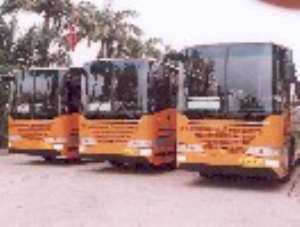 The Metro Mass Transit (MMT) Limited is expected to increase its current operational fleet of 445 buses to 800 by the end of this year to provide transport services to a large number of commuters in the urban and the rural areas.


Mr Cas van Eerden, Managing Director of the MMT announced this at a press briefing in Tamale in the Northern Region last Thursday.

He said the MMT would be creating a rural-urban service division with the arrival of 100 TATA buses and 150 DAF commuter buses within the period, which would be expected to serve several communities in the Northern, Upper East and Upper West regions.

The introduction of the Metro Mass Transport into the public transport system was made at the instance of government in 2001 to ensure safe, affordable, efficient and reliable transport service within the Metropolitan and Municipal areas.

'Captain Smart arrest is intolerance, he did no wrong' – Med...
45 minutes ago