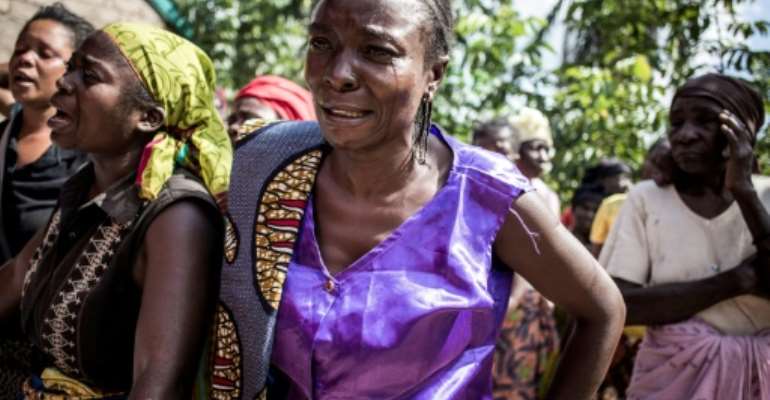 In DR Congo, funerals are exceptionally important -- a time of grief but also renewal. By John WESSELS (AFP)

A ban on funeral commemorations in Democratic Republic of Congo aims at preventing the spread of coronavirus -- but it has dealt a body blow to the country's most deep-rooted traditions and grandest social events.

In Kinshasa, the sprawling capital of 10 million people, funeral parties are announced in the media and last all night, often spilling out on to the streets.

Before the epidemic, the phrase "I've got a funeral" could be heard as often as "I'm going to a wedding," "I'm off to church" or "I'm meeting friends in a bar."

Funerals are typically top of the social agenda.

In the DRC, "they are meeting places, including for new romances," said sociologist Leon Tsambu.

"It's where family ties are knitted and strengthened. It's a time to get together."

But on March 18, President Felix Tshisekedi announced an immediate ban on funeral gatherings, both in halls and homes.

"The mortal remains will be taken directly from the mortuary to the place of burial with a limited number of followers," he declared.

Numerous countries around the world have adopted similar measures to try to counter COVID-19, but the Congolese feel especially saddened.

"There is a degree of frustration. We are used to having burials with a maximum amount of fanfare," said Francois Okondamomba, the national radio and television chief at Kisangani in the northeast.

"There are more than 200 of us here at RTNC, but we had to limit to 10 the number of people who went to the burial of our former provincial director," explained Okondamomba.

"We cannot all go with him to the cemetery. This is taboo in my culture, I don't know how to explain it to my family," he fretted.

"If a traditional chief dies during this time of coronavirus, tradition will be thrown onto the rubbish heap," said Sylvain Mabonga-Bonga, a Pende community chief in the central town of Kikwit.

'There's no respect for the dead, for our ancestral culture."

Valere Mpokoto, another elder in Kikwit, said he feared family and social ties would be damaged.

"Our traditions in Africa have considerable cultural value," he said. "No one can neglect them."

However, there are some who want the ban extended beyond the health crisis to put an end to the "festive" business that has built up around death, particularly in the capital.

Journalist Rachel Kitstita took to Twitter to call for the ban on large funeral celebrations to be made permanent -- she was retweeted 1,400 times.

"There's a lot of excess surrounding funerals," said Kitstita, who runs the Actu30 website. "It causes a lot of pointless expense. It's a bit too much."

Funerals are no small affair in DR Congo. Pictured: The coffin of former premier and opposition leader Etienne Tshisekedi, the father of President Felix Tshisekedi, at ceremonies last May. By John WESSELS (AFP)

She explained: "It's become a real industry. You have to buy the coffin, pay the morgue, hire a hall, transport people to the mortuary, wear traditional clothes and uniforms... death takes on a party theme."

The costs of a funeral can climb into the hundreds of dollars -- a fortune for most households in DR Congo.

The country has declared 109 cases of COVID-19 infection and eight fatalities, including public figures and people connected to the president. These VIPs would normally have been sent off in grand style, and at great expense.