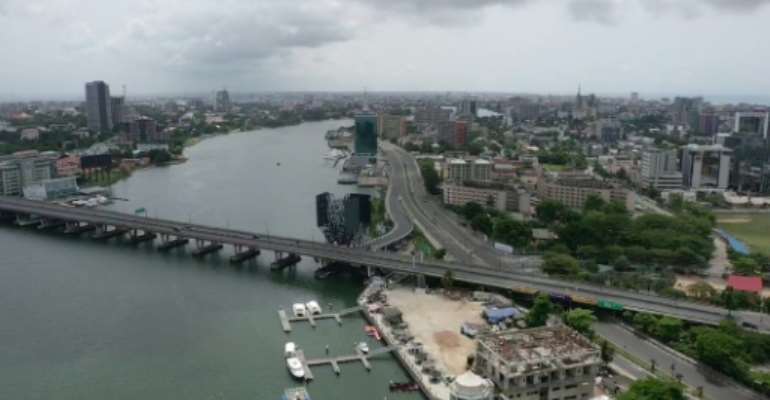 The bridges that are normally impassable at rush hour were empty. By Pierre FAVENNEC (AFP)

Gone were the traffic jams that snarl bumper-to-bumper out to the suburbs, gone was the hustle, the noise and the sweat that usually fills the crowded streets with endless life.

After President Muhammadu Buhari ordered residents to stay indoors and all movement to cease from Monday evening, the singing of birds and the hum of generators were the only sounds to be heard on the first morning of the shutdown.

The waters of the lagoon were still, bridges that are normally impassable at rush hour were empty, and the vendors that sell their wares to passing traffic had vanished.

On a key highway leading to the capital, a group of boys playing football had replaced the usual mass of cars, buses and lorries.

A policeman removes a road block to give access to a fuel tanker. By PIUS UTOMI EKPEI (AFP)

A hundred trucks carrying cement from the company of Africa's richest man Aliko Dangote stood motionless in a line at one checkpoint.

"We received instructions not to allow any vehicle to pass except those on essential services," a masked officer told AFP.

Police backed up by personnel from the city's myriad of other security agencies checked identity cards of drivers before determining whether to let them by.

The Lagos state governor has urged security forces to be "friendly and civil" but officers have also been licensed to use force on those who do not comply.

Officials insist the draconian measures are needed to halt the spread of a virus after 135 cases and two deaths were confirmed across Nigeria.

Lagos is the hotspot with 81 infections detected so far.

Along the main road through the middle class neighbourhood of Lekki, betting shops, mattress stores, churches, florists and scrap metal dealers had all closed their doors.

But in the alleyways of the poorer district of Ajah there was clear anxiety and rising anger.

The Ikorodu expressway was deserted. By PIUS UTOMI EKPEI (AFP)

Most of the people here have very little savings to fall back on. They live hand-to-mouth, relying on their daily earnings to survive.

Police had passed by in the early hours to disperse the few people refusing to obey the lockdown.

Margaret Ajeji was still out on the street smoking a catfish to sell to any rare passersby.

Food stores are allowed to remain open -- and it seemed those hawking their goods by the side of the roads were being allowed to keep working.

But it wasn't much help.

"People have no money to eat. They don't buy anything," Ajeji lamented.

A policeman on a bike drives past a deserted bus stop. By PIUS UTOMI EKPEI (AFP)

Next to her Tewole was trying to sell the sachets of water that provide one of the only sources of drinking water for many Nigerians.

She had only had two customers all morning.

"If I don't sell this water then I won't make my small income," she said in Pidgin, the widely spoken local language.

"I won't have anything to eat. If my children get sick there won't be any money to take them to hospital."

Young man Samuel Agber could not hide his desperation.

"We work and still go hungry in Nigeria, so what about when we stay at home," he said.

"They have to restrict movement, but provide food for us. We are humans, we need to eat."