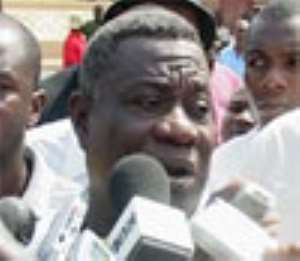 A former Cadre member and Coordinator to the Commander of the now-defunct
Civil Service Organisation, Prince Adam Hamidu, has reiterated the need for members of the National Democratic Congress to throw their weight behind an alternative presidential candidate – citing the unimpressive record of John Atta Mills in his last three attempts.

Prof Mills has consistently failed to prove his credentials as a potential presidential winner, according to Mr Hamidu, who is advocating a candidate from any of the country's three Northern regions to stand as the NDC's presidential flagbearer in the coming 2008 elections.

He has named Alhaji Mahama Iddrisu, a former minister and a member of the party's think tank, as his preferred candidate. Mr Hamidu was speaking in an exclusive interview with The Statesman Wednesday. Using statistics to illustrate his point, Mr Hamidu countered that even Prof Mills' own region has lost faith in its failed presidential candidate. In the 2004 elections, the NDC won just two of the 19 parliamentary seats for Central Region, he pointed out.

In a press release, Mr Hamidu describes the 2004 election results as a “disaster” for the NDC and attributes this failure to the “rejection” of Prof Mills in his home base of the Central and Western Regions where his ethnic group, the Fantes, dominate.

The electorate of these areas have now made it “crystal clear that the leadership of the NDC in the three previous elections will continue to suffer another defeat if elected again to lead the NDC come December 2008.” “The Central Region continues to attribute their betrayal votes to poor party structures,” Mr Hamidu said in his press release.

Speaking with The Statesman, Mr Hamidu cited as positive examples both former president Jerry John Rawlings and President John Agyekum Kufuor, who commanded huge bodies of home-based support, their potential for presidential prowess recognised and encouraged by their townspeople. Without this, how is the general electorate expected to trust a candidate who does not even have the backing of his own community?

Now, he said, NDC is in dire need of a new candidate since Prof Mills has succeeded in dividing the members due to his bad leadership style. “The man has very poor inter-personnel relationship skills, but his wife is worse and he also lacks political competence,” Mr Hamidu stressed to this reporter – lamenting the current lack of dynamic and effective leadership within the party.

Since Prof Mills' appointment as a Vice President came on a silver platter, according to his critic, he does not treat party sympathisers and supporters with the respect they deserve.

“He treats them as objects other than human beings, thus surrounding himself with only his friends and relatives and pushing the original foot soldiers and activists, who worked so hard for the party at a time when it was not so profitable and rewarding, into solitary confinement. Instead of building teams, he rather sought to divide and rule discriminately on the basis of tribalism,” according to Mr Hamidu.

Since politics is a game of numbers it is important that the NDC secures a “winnable” candidate who would be widely supported by majority of Ghanaians, he advised – a role which he now believes Prof Mills is incapable of playing. “Leadership drives change and change drives leadership; so he should be changed,” Mr Hamidu advised.

Explaining his preference for a Northern candidate, Mr Hamidu stated that the three Northern regions had consistently voted for the NDC in recent elections. Alhaji Mahama Iddrisu, whom he is advocating for the flagbearership, has a deep symbiosis between party activities and government, and is a man who could walk several kilometers to canvass votes in the hinterlands for the party, according to Mr Hamidu.

“I know Ekow Spio Gabrah is the people's choice but the Southern sector has had its fair share and I think it's now time for a qualified Northerner to also try and lead the party for a sure victory in 2008.”