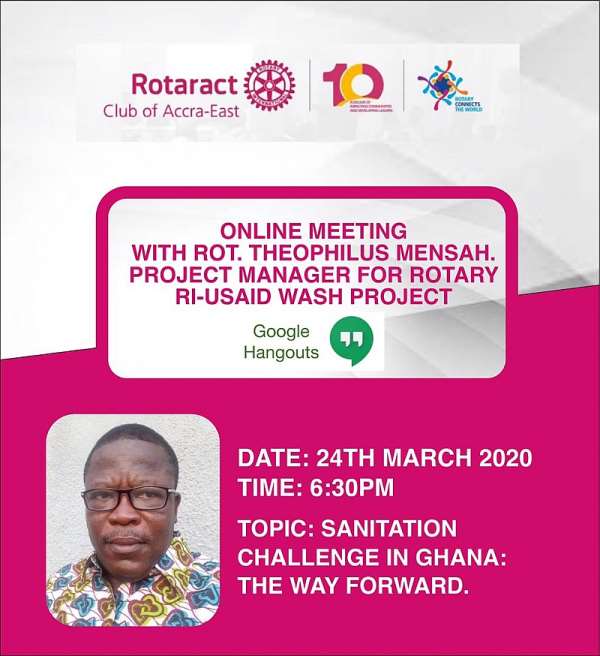 The Rotaract Club of Accra-East on Monday, March 16, 2020, issued a statement to inform its internal and external publics on its decision to suspend all club activities in response to the COVID-19 pandemic.

The decision was part of the Club's adherence to a directive issued by H.E Nana Akufo-Addo, President of the Republic of Ghana who imposed a ban on social gatherings exceeding 25 people.

As a Club that prides itself in community engagements such as sensitization of school pupils on hygiene, communicable diseases among others, the current restriction on social activities which forms part of precautionary protocols prescribed by the Ghana Health Service (GHS) for the fight against COVID-19, has greatly affected the spirit of Rotaract fellowships around the world.

In spite of the restrictions on physical engagements, the Rotaract Club of Accra-East of District 9102, which gained Rotary International recognition in 2019 for their incredible use of facebook to enhance its club meetings; has again made good use of technology to hold meetings.

On Tuesday March 24, the Club organised its first online meeting since the outbreak of Corona Virus in Ghana. The team employed Meet by Google for the maiden online meeting.

The virtual meeting was attended by 10 members, four visiting Rotaractors and one visiting Rotarian who served as guest speaker for the night.

Attendees sung fellowship songs and engaged each other as usually done during physical meetings. The only missing ingredient was the usual Rotaract hugs which were sent and received virtually.

In his submission, he stated that Ghana could make enough progress on the subject if individuals, corporate organisations and Non-Governmental Agencies deepens their advocacy for clear policy direction and development of relevant infrastructure.

Rotarian Theophilus, also called on Rotaract and Rotary Clubs as well as other groups in society to participate in educating and sensitising communities on hygiene.

Elorm Addo, Past President of the Club and current Director for Rotary Foundation in expressing her impressions of the maiden online meeting said “Beautiful meeting it was”.

Peter Ahiakpor, Past President of the Club and current Director for Monitoring and Evaluation, also expressed satisfaction for the manner in which the meeting was organized.