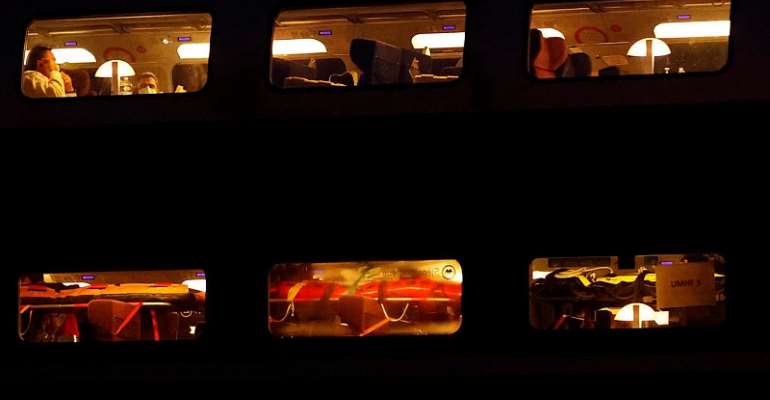 A high speed TGV train is preparing to take patients from Alsace, one of the regions hardest hit by the Covid-19 coronavirus, to hospitals elsewhere in the country, on Thursday. Patients have been transported from eastern France around the country for a week, but using a train to do so is a first, for France and for Europe.

Twenty patients infected with the coronavirus and needing intensive care are being transported from Strasbourg to hospitals around France to the Loire region, which has been one of the least hit.

The double-decker TGV usually transports hundreds of passengers. This one will have fewer than 100 people on board, with about 50 logistical staff and medical personnel from hospitals in Nantes, Angers and Paris accompanying the 20 patients.

The rail operator, SNCF, had put in place the possibility of medicalising trains, notably to transport people injured by terrorist attacks from one part of he country to another. Now the theory is being put into practice.

Train cars transformed
Early Thursday morning ambulances were seen approaching the platform in the Strasbourg station where the train was parked Wednesday night.

Patients will be distributed in five cars, four in each one, on stretchers laid out over seats that will not be removed.

Each car will have a doctor, an intern, an anesthesiologist and three nurses. Patients will be on the bottom levels, with the top levels used by medical personnel to get around and move material.

The rail operator, SNCF, has decided to double the train, to ten cars. An empty five-car train at the front will absorb any shocks, like collisions with animals on the tracks.

Spreading out patients
Using a train to transport patients like this is a first for Europe, according to France's Health minister Olivier Véran. It could be repeated, as hospitals in the east of France are overwhelmed with coronavirus cases, are reaching critical capacity.

For the last eight days, patients have already been distributed away from overwhelmed hospitals. Military planes evacuated 18 patients from a Mulhouse hospital to Marseille, Bordeaux, Quimper and Brest.

Helicopters have brought some patients to neighbouring countries, like Germany. On Sunday a helicopter carrier with a hospital on board brought patients from Ajaccio, in Corsica, to Marseille.