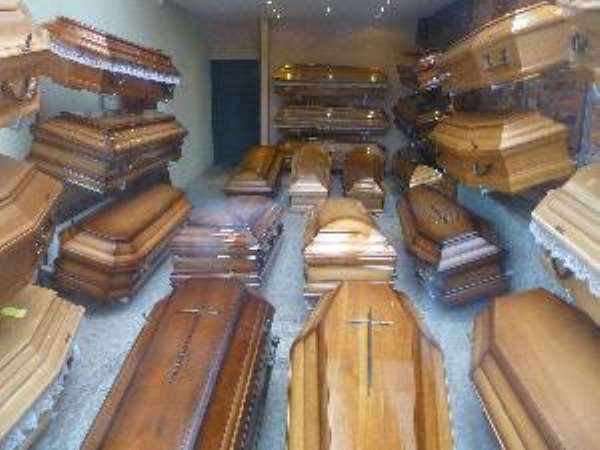 Players in the funeral industry in Assin North, Assin South and Assin Central areas have bemoaned low sales since President Akufo-Addo's directive banning all social gatherings to contain the spread of the coronavirus.

They described the low level of sales as unprecedented and a serious drain on their income – affecting their investments and business expansions.

In an interview with the Ghana News Agency (GNA), Mr Johnson Lamptey, a 52-year-old casket maker with over 20 years of experience said, "This is the first time we are experiencing such a massive dip in sale returns."

Holding his cross-cut saw, and pointing sadly to over 10 caskets that were not collected last week, he prayed that the directive was reversed in no time to enable them stay in business.

Mr Lamptey who owns "You were once like me" casket designing shop near the Assin Fosu St Francis Hospital morgue said his sales had reduced from, at least, six per week to two.

Mr Odame, another dealer whose business is at Assin Bereku, the capital of the Assin North District, said his capital was locked up due to low patronage.

He said he normally sold at least five coffins per week with prices ranging from GH¢1,500.00 to GH¢7,000.00, but sold only two coffins after the directive on COVID-19 preventive measures.

He complained about how their businesses were grinding to a halt as a result of poor sales coupled with their inability to access wood, now selling at “exceptionally exorbitant” prices as major factors affecting the progress of their businesses.

Madam Ernestine Baidoo, a seamstress and a funeral Decor with over 15 apprentices also lamented about the drop in sales.

“I can't pay my workers and feed my family of four as a widow, but my prayer is to get more buyers for my beautiful funeral dresses," she said as she hanged some of her dresses on the nails in her shop.

Madam Ernestina who sold not less than GH¢3,500.00 of funeral dresses per week had made only GH¢2,400.00 over the period of the directive.

Uncertain about when the directive will be reversed, Madam Ernestina with over 18 years' experience in the business, said, "We always pray for increased sales.

“No matter what, we will all die one day so it is not a sin for us to pray for high sales,” she added.

At Nyakomasi Ahenkro in the Assin South District, some casket makers and dealers in funeral wares complained of piles of uncollected caskets, wreath and wares as owners called to suspend their funerals.

Also, it was not different at the Assin Fosu Polyclinic and Brofoyedru private morgue, the biggest facility serving the three districts.

Officials spoke with the GNA on condition of anonymity expressed fears about possibility of not being able to break even if the situation persisted for long.

They largely complained about stagnant sales and prayed the government to reduce utility bills with constant supply to enable them sustain their businesses.