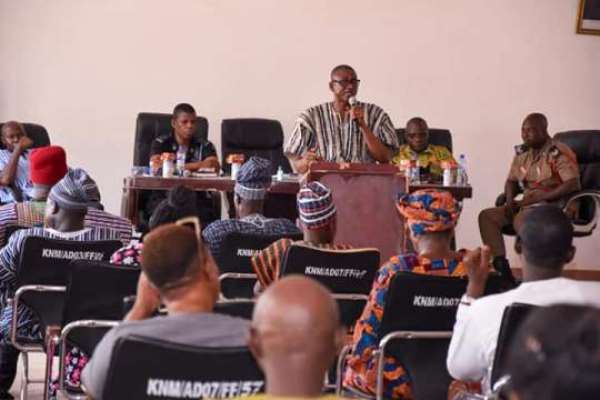 The Kassena Nankana Municipal Security Council in the Upper East Region has held a stakeholder meeting to engage duty-bearers and opinion leaders on ways to implement the President's directives on preventing the spread of the coronavirus.

This came as a result of a further directive by the Upper East Regional Minister for Municipal and District Security Councils to meet with major stakeholders to discuss and implement the directives.

In attendance were members of the Municipal Security Council, Paramount chiefs, and representatives of the Catholic Church, Local Council of Churches, the Muslim community and political parties.

Others were the Regional and District Directors of the Ghana Health Service, the Municipal Director of Education, Heads of second cycle institutions and the media among others.

Mr William Aduum, the Kassena Nankana Municipal Chief Executive, said the purpose of the meeting was to engage the stakeholders on implementation of the President's directive on the coronavirus.

He said the Assembly was prepared to partner all the key stakeholders to prevent the spread of the disease to the area.

“One of the key things we want to do is to embark on a serious public education in our markets because a lot of people gather at the market places and funeral homes. These are trying times for all of us and I hope the radio stations would give us pro-bonus to enable us reach out to many people,” he said.

Mr Aduum said the traditional rulers in the area had the authority to enforce some of the directives especially, the performance of funerals, and appealed to the paramount chiefs to support the Assembly in that regard.

Dr Winfred Ofosu, the Upper East Regional Director of Ghana Health Service, said as part of the Region's preparedness towards the control and spread of the virus, the Regional Health Directorate had allocated an ambulance that would transport any reported case to the appropriate treatment centre.

He said the Directorate had also put out a telephone help line for people to report any suspected case to the Service.

He said the Region's technical team was currently undergoing training in Accra and upon their return, would also train staff of the various districts to upgrade their knowledge on the virus.

The Acting Medical Superintendent of the War Memorial Hospital, Dr Edwin Saanwie, said as part of measures put in place to combat the virus, the Hospital was training its staff on the use of Personal Protection Equipment's (PPE) and also limiting the number of people who visited their sick relatives at the Hospital.

He said the Hospital had made available soap and running water for all persons who visited the facility to wash their hands before leaving its premises.

Dr Saanwie said the Hospital needed a lot of logistics to support its work, “We need logistics in the Hospital to compliment what we are doing, our labs are running down and we need support to manage them”.

He appealed to the Assembly and other institutions in the area to come to the aid of the Hospital.