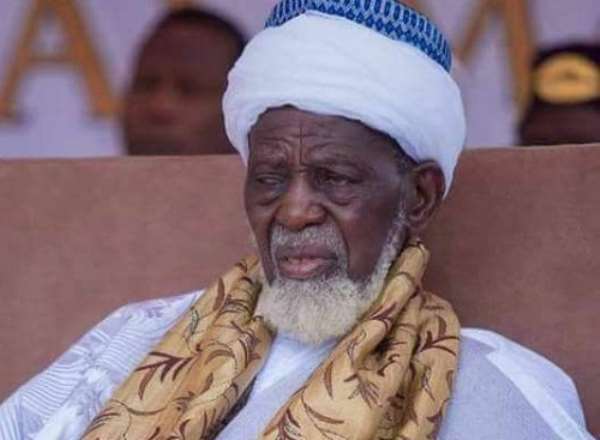 The National Chief Imam, Sheikh Usman Nuhu Sharubutu has called on Muslims to strictly adhere to the directive by President Akufo-Addo to suspend all religious gathering as part of efforts to control the spread of the 2019 Coronavirus (COVID-19).

Speaking at a press conference, he indicated that the daily prayers held in mosques are all to be suspended except for the Friday prayers.

His Spokesperson, Sheikh Arimeyao Shaibu in an interview on Eyewitness News said the new model will ensure that prayer calls will be made from mosques but Muslims will be expected to pray in their respective homes.

“We have indicated according to the Chief Imam that we all suspend the daily routine prayers adopting the Kuwaiti Model where prayer call is made but you stay at home and pray individually.”

“With respect to Friday prayer, further instruction will be coming as to how to deal with that. We are expecting that everybody will comply,” he added.

Sheikh Arimeyao Shaibu explained that due to the complexities regarding the Islamic Friday prayers further deliberations have to be undertaken to ensure that whatever decision is arrived at, fits into the Islamic laws.

“We know how people feel about the Friday prayers and we want to be clear in the way we will announce to them that Friday prayer will also be affected by the president’s directive. We want to do it taking into account the full understanding of our jurisprudence…Friday congregation will come with further direction as to how that will be done… We expect that all Muslims will respect that directive,” he said.

President Nana Akufo-Addo on Sunday, March 15, 2020, announced new public gathering advisories to check the spread of COVID-19 in the country.

Among other things, he announced a ban on funerals, festivals, all religious activities, conferences and all other events that call for a mass gathering of people.

He, however, indicated that exemptions could be made for groups of 25 people or less.

More Headlines
ModernGhana Links
We Will Not Allow Anyone To Cheat Us In 2024 Elections — Mahama
Assemblies of God supports anti-LGBTQI+ Bill in a memo to Parliament
31.2km Assin Praso Assin Fosu road to be completed in November 2023
Your head should be properly examined if you think we'll sit down to be brutalised, murdered in 2024 elections again – Elvis Afriyie-Ankrah
Cape Coast Airport will be constructed at all cost - Akufo-Addo
‘We won but soldiers forced EC to declare results in NPP’s favour’ – Mahama
Komenda factory: "Mahama constructed the roof before building the foundation" - Akufo-Addo
Akufo-Addo commissions Engineering Workshops at Cape Coast Technical University
Komenda Sugar factory to be operational in 2022 — Akufo-Addo assures
TOP STORIES