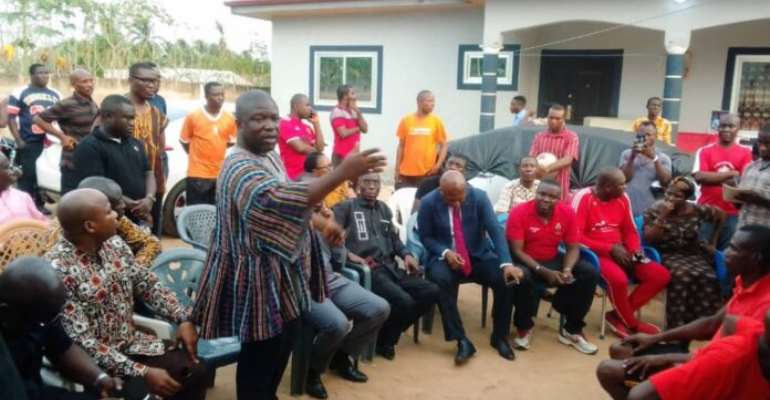 The Volta Caucus of the opposition National Democratic Congress (NDC) in Parliament has visited the home of the late Marcus Mawutor Adzahli to commiserate with the family.

The deceased who was the Assemblyman for the Sogakope South Electoral Area was gruesomely murdered at his residence in the wee hours of Sunday by some unknown assailants.

At the family home of the deceased in Toklokpo, the Caucus led by the Chairperson and MP for Ho West Emmanuel Kwesi Bedzrah and the party’s regional secretary, Mr James Gunu expressed shock and regret at the incident.

According to Mr. Bedzrah, “the minority in Parliament, especially the Volta Caucus is devastated over the incident and found it prudent to come and commiserate with the family and to encourage them to stay strong in this difficult times.”

He informed the family that the medical bills of the wife and daughter of deceased who were admitted at the Sogakope district hospital after the attack would be paid by the caucus and assured them of their total support till the burial of the deceased, who was a known NDC activist.

The caucus, the South Tongu MP and the Constituency Chairman announced a combined GHC30,000.00 bounty for anyone who would offer information for the arrest of the perpetrators and urged residents to cooperate with the investigative team in charge of the case.

The family, however, expressed mistrust in the conduct of the police, indicating that if the police had acted swiftly during the time of the incident, their son wouldn’t have been killed.

According to an uncle of the deceased, the family finds it difficult to believe that the police would do a clean job in bringing the killers to book.

After the meeting with the family, the team proceeded to the residence [crime scene] of the deceased to interact with occupants of the house, after which they moved to the DCE’s residence for a closed-door meeting with him and the Sogakope Divisional Commander of Police.

Speaking after the meeting, MP for North Tongu, Samuel Okudzeto Ablakwa told journalists that, the Minority caucus in Parliament would be making a statement on the issue and to a large extent on the high incidence of insecurity in Sogakope in recent times.

He stated that their visit is a fact-finding mission to ascertain for themselves, the circumstances leading to the barbaric and heinous murder of the young man; indicating that the Minority would meet with the Interior Minister, the IGP over the incident.

He added that “At the meeting with the DCE and the Divisional Commander we have also indicated our reservations as to how the crime scene has been left unprotected,” he said.

Mr. Okudzeto stated further that, “We assured the DISEC of our preparedness to help them, we also have made a few recommendations, we also informed them that we would be making a statement in Parliament on some of the reservations and observations we made here but in the spirit of mutual respect and cordiality, it would not be prudent I divulge everything to the media”.

He urged residents to remain calm and commit themselves to helping the police unmask the perpetrators.