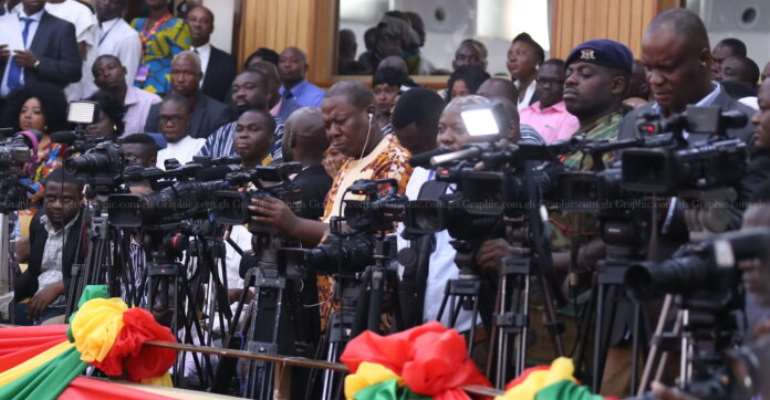 The Parliamentary Press Corps has served notice that it will today, Thursday, February 27 convey a meeting to decide on its next line action after threats from the Speaker of Parliament to declare journalists as strangers in the House.

Speaker of Parliament, Prof. Mike Oquaye on Wednesday summoned the Dean of the Parliamentary Press Corps and the Director of Public Affairs of Parliament over the conduct of journalists at Tuesday’s sitting.

The summon followed a complaint from the Majority Leader, Osei Kyei-Mensah-Bonsu to the effect that journalists abandoned proceedings in the House and gave audience to the Member of Parliament for Ellembele, Emmanuel Armah Buah who had concerns about the Energy Sector component of the State of the Nation Address.

But Dean of the Parliamentary Press Corps, Nana Agyeman Tenkorang who was unhappy about the Speaker’s directive said, today’s meeting will among other things find a lasting solution the matter at hand.

“I find the comment unfortunate because I thought the matter had been dealt with so I was surprised when it was raised again. Sometimes if parliamentary proceedings are ongoing, I receive a memo from the Public Affairs Directorate that a delegation outside is going to pay a courtesy call on the Speaker. We abandon the work that we are doing in the Chamber for us to cover the courtesy call. So why do they see nothing wrong with that but see the interview with Mr. Buah as something that is unheard of.”

“I have made the press aware that we are going to have a general meeting [today] to get the views of my colleagues. The Director of Public Affairs will also come for the meeting for us to know how we can go forward together,” he added. Speaker not seeking to gag media

Already many have interpreted the Speaker's decision as an attempt to stop them from discharging their duties.

However, Parliament in a statement clarified that the Speaker's decision was not aimed at stopping the media from doing their work.

“Parliament has noted media reports purporting that the Speaker of Parliament is seeking to gag the media. The Office would like to put on record that at no time either in his capacity as Speaker or in his personal capacity has Prof. Aaron Michael Oquaye sought to prevent the media from doing its work. Parliament recognises the critical role of the media and the Speaker made reference to the same when he spoke about the high regard with which he holds the media's work.”

In his ruling on the complaint, the Speaker indicated that he would not hesitate to take action against journalists if due coverage is not given to the proceedings of the plenary.

“It is forbidden. If they have any doubt to abandon the permission given them to cover proceedings in this House and go outside the Chamber itself and do some other work…I want to let the media know. If that which is reported to have happened should happen again, I have reminded you of the fact that you are here as guests by my permission. Because of the importance, this House attaches to the inking profession, any such humiliation will make you an unwelcome guest and your welcome will be duly withdrawn.”