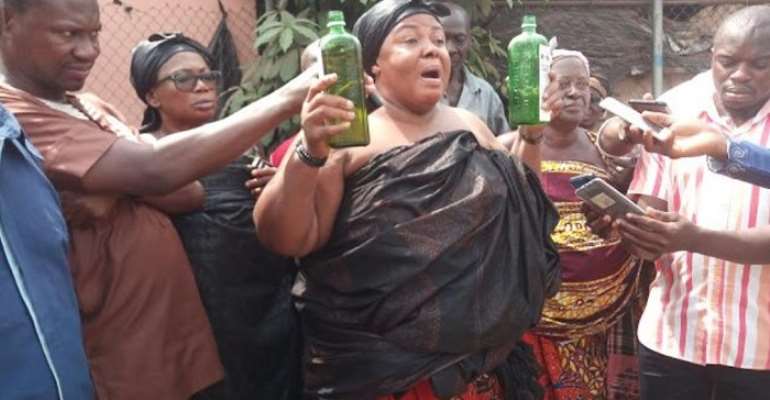 The Queen Mother of Berekum Traditional Area, Akosua Ameyaahene, on Tuesday poured libation to invoke curses on the Municipal Chief Executive (MCE) of Berekum, Kofi Adjei, the Municipal Assembly and constituency executives of the New Patriotic Party (NPP) for allegedly failing to lead the development agenda of the town.

The decision to turn to the spirits to deal with political leaders of the town was as a result of the claims that the MCE, the assembly and the constituency executives disrespected the custodians of the land by filing a suit against them in court over who has the right to build and control public toilets in the town.

In the course of invoking the curses, the queen mother specifically accused the MCE, the constituency chairman of Berekum East (NPP), Kwaku Kakam, of misappropriating GH¢800 daily accruing from toilet fees.

According to sources, the queen mother was complaining because of the refusal by the assembly to allow Berekum Citizens Association abroad to demolish an old toilet building which she said served as a death trap and in its place, construct a modern one.

When the assembly refused the request, the association then approached the traditional council which willingly gave the go-ahead for them to start the project but they were stopped by the assembly through a court action.

This is what has angered the queen mother who is claiming that the assembly and the party executives are working against the development of Berekum.

The MCE and the executives of the party are yet to respond to the queen mother's allegations and action.