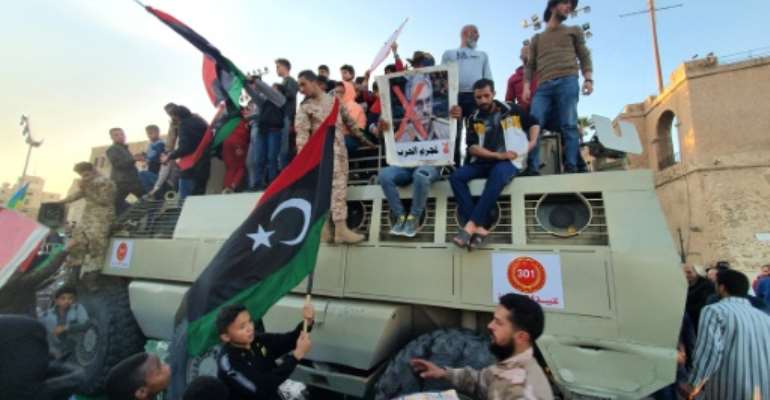 A man holds up a sign showing the face of Libyan strongman Khalifa Haftar crossed out with a red "X", as he sits with others on an armoured military vehicle of forces loyal to the UN-recognised Tripoli-based "Government of National Accord. By Mahmud TURKIA (AFP/File)

After 10 months of fighting that has torn their country apart, exhausted Libyans voice deep fears and say their fate is no longer in their own hands.

The oil-rich North African country has been mired in chaos since a 2011 NATO-backed uprising that killed longtime dictator Moamer Kadhafi, with two rival administrations vying for power.

The conflict deepened last April when military strongman Khalifa Haftar, who controls much of Libya's south and east, launched an assault to seize Tripoli, the base of the UN-recognised Government of National Accord (GNA).

A fragile ceasefire, brokered by Moscow and Ankara, was established on January 12. And at an international summit in Berlin a week later, world leaders agreed to end all foreign interference in Libya and to uphold a weapons embargo.

But on the streets of Libya, war-weary citizens are increasingly hopeless, telling AFP that their resource-rich country has become a plaything of foreign powers.

A picture shows the debris inside a room following a rocket blast in Tripoli's southern district of Hadhba al-Badri on January 28. By Mahmud TURKIA (AFP/File)

The fighting has drawn in a range of foreign combatants, among them reportedly Russian mercenaries, Sudanese militiamen for hire and members of pro-Turkish Syrian units.

Mohammad al-Barouni, a student from Tripoli, charged that foreign players had been sending weapons and fighters into Libya "without fear or shame".

"After 10 months of fighting... the capital and its suburbs have become a den of mercenaries where arms are flooding in, in broad daylight", he said.

Nouri Bengharsa, a civil servant, complained that "since the fall of Kadhafi, Libyans have allowed foreigners to meddle in their affairs, and now they can't get rid of them".

Libyan politicians were partly to blame because they are "incapable of dialogue in their own country," he said while shopping in a vegetable market in Janzour, west of the capital.

"Yet they run to foreign capitals where they have specific agendas dictated to them."

A shopping street in the old quarter of the capital Tripoli. By Mahmud TURKIA (AFP/File)

The UN Security Council has been plagued by divisions over Libya and has been unable to adopt any resolution on the conflict for the past 10 months.

Salem al-Mahmudi, a vendor, said the international community had "not managed to tame" the countries that support eastern commander Haftar or Fayez al-Sarraj's Tripoli-based GNA.

Those countries were exploiting the truce to dispatch new military reinforcements ahead of a "great battle" in Tripoli, Mahmudi said.

Haftar has the backing of Egypt, the United Arab Emirates and Russia, among others, while the GNA is mainly supported by Qatar and Turkey.

Despite the ceasefire and the commitments made in Berlin, the military escalation has intensified.

Mahmudi said "Libyan airports and ports are used to transfer arms and fighters in the full view of the international community... which doesn't dare even name the states fuelling the conflict".

"The warring parties see a military solution as the only way to end the fighting," said the trader, aged in his 50s, adding that this option was "more realistic" as no political solution had so far been reached.

UN Envoy for Libya Ghassan Salame has mediated in talks held in Geneva, where he said representatives of the warring parties had agreed on the principle of turning their shaky truce into a lasting ceasefire. By Handout (UNITED NATIONS/AFP/File)

The UN's Libya envoy Ghassan Salame last week accused "unscrupulous" foreign actors -- without specifying who -- of continuing to meddle in Libya's conflict, in violation of the Berlin commitments.

Warring parties "have continued to receive a sizable amount of advanced equipment, fighters and advisors from foreign sponsors", he told the Security Council, warning that such moves "threaten to precipitate a new and much more dangerous conflagration".

Representatives on both sides of the conflict were meeting in Geneva this week in a UN-sponsored joint military commission. They agreed on the principle of turning their shaky truce into a lasting ceasefire, Salame said.

The UN envoy said the two sides would meet again for talks on economic cooperation, in Cairo on February 9, and could hold political talks on resolving the conflict in Geneva in two weeks' time.

Ibtissam al-Mezoughi, a retired public servant and mother of four, voiced deep scepticism about the ongoing diplomacy in faraway capitals.

Whether meetings are held in "Berlin or Geneva, it's not a question of ending the war, but of putting the finishing touches on international actors' areas of influence", she said.

"The Libyans have lost control. It's too late", she said, voicing fear that her country, now divided into zones of foreign influence, was becoming "another Syria".

It's not good at all — GMA expresses concerns over rising CO...
4 minutes ago