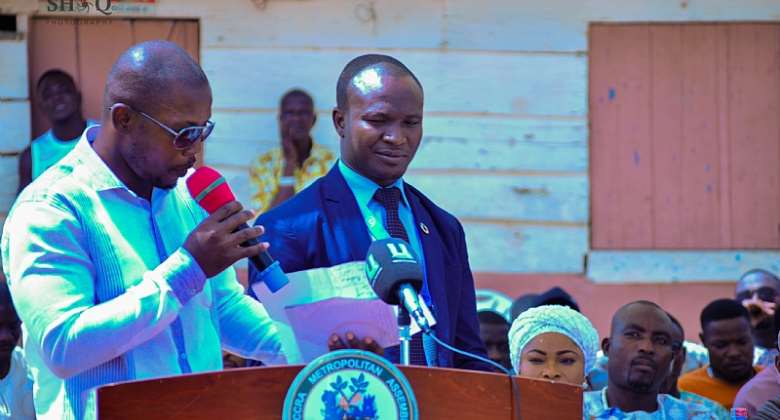 The Special Adviser to the Mayor of Accra, Mr. Desmond Appiah has called on some selected students and a section of the public to embrace waste segregation. He opines that segregation reduces waste going to landfills and in turn makes waste more reusable.

This is expected to be adopted in all households, schools and other places. Mr. Appiah made this call at a durbar organized by the Accra Metropolitan Assembly (A.M.A) with support from the World Health Organization (W.H.O), the Ghana Health Service (G.H.S) and the Ghana Education Service (G.E.S) in Accra yesterday.

The durbar which is dubbed “BreatheLife Accra Campaign” gathered students drawn from schools within the Accra Metro, opinion leaders, chiefs, religious leaders among others to educate them on the need to safeguard the quality of air, dangers of burning and the need to segregate wastes.

According to a review report of the Triple Gains of Waste and the Way Forward for Ghana (2018), Accra and Kumasi being the largest cities in Ghana are estimated to generate about 4,000 tons of waste on daily basis where a greater portion of these wastes usually end up in drains and water bodies.

As part of the President’s agenda of “Making Accra the Cleanest City in Africa by 2020” the Assembly has chosen some areas within the metro including Chorkor, Jamestown, and Kaneshie especially, to educate them on the need to keep a clean, green and healthy environment.

Mr. Appiah cautioned on waste burning and its hazardous effects on society. He stated that burning and its related diseases has led to an increased mortality rate in our communities. Instead, alternative means of cooking such as the use of gas should be adopted either than burning firewood and charcoal which would have hazardous impacts on the environment.

He explained that when wastes are properly segregated, plastics for instance can either be reused or recycled into new products. Food remains could also be used for organic fertilizer or serve as pig or chicken feed. There is then the need to distribute some special bins to schools within the Accra Metro to help achieve this purpose. In his final word, he submitted that the A.M.A is working closely with the Forestry Commission to start the planting of 1000 trees within the metro.

Madam Dorcas Hushie of the Ghana Education Service also advised the students to make use of waste materials. She stated that students could use old saucepans and other dishes that are not needed in the household to plant vegetables.

She also called on the Assembly Members, chiefs and opinion leaders to take steward of trees that are being planted in the various schools. She was of the concern that some persons in the community who played football in these schools often destroyed the plants and hopes that such conduct is discouraged.

Mr. Jerry Fiave of the Health Promotion Division of the Ghana Health Service also took turn to educate students on the effects of air pollution. He revealed among other things that “the biggest property that we have from God is our brain. So if somebody would take a big property from you- it is your brain.