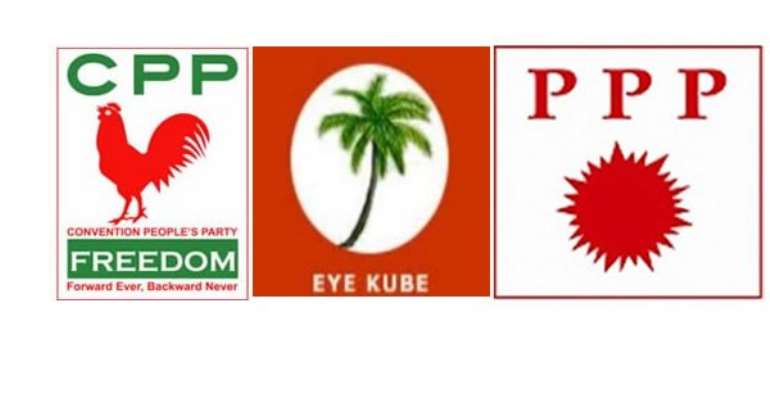 CPP, PPP, and others say they support the Inter-Party Resistance against a new voters' register.

Some five political parties, including the Convention Peoples’ Party (CPP) and the Progressive Peoples’ Party (PPP), have issued a disclaimer refuting claims that they are in support of the new voters' register.

They say they do not side with the stance taken by the governing New Patriotic Party (NPP) and the Electoral Commission (EC) concerning the creation of a new voters’ register.

This comes after Founder and Leader of the Liberal Party of Ghana (LPG), Kofi Akpaloo, address a news conference on Thursday, on behalf of a group calling itself the Coalition of Political Parties for ‘YES’ to a new register. According to him, the UPP, UFP, CPP, PPP, GCPP, and others are in support of the EC’s decision to create a new voters’ register.

In sharp contrast, however, the concerned parties say they have not authorised Mr. Akpaloo or any other person to represent their views on the matter and rebutted their alleged consensus with the EC’s actions.

“The above parties have not, will not and shall never support such fraudulent and mischievous approach to deceive and mislead the people of Ghana in the manner that the NPP, the EC and these group of fraudulent politicians are working to perpetuate this grand fraud on the good people of Ghana,“ the statement said.

It added: “We want to state for the record that the above parties represented by their leadership have publicly decried our abhorrence for the recalcitrant behaviour of the EC in the matter of the replacement of the biometric register. We have since issued public statements indicating our dissatisfaction with the conduct of the EC and that matter our rejection of the proposal to replace the biometric voters' register.”

They declared their support for the Inter-Party Resistance against a new voters’ register and indicated that they would be joining the series of protests scheduled to take place in major cities across the country to demonstrate their dissatisfaction with the proposed new voter’s register.

“On Monday, the 6th of January, 2020 we joined forces with three (3) other parties under the umbrella group of the Inter-Party Resistance against the New voters register to make our case to the people and also announce our intention to embark on series of public manifestations across the country under the YENPENE declaration, the first of which comes off in Tamale the 11th of January 2020 at 6 am prompt.”

They concluded by calling on the general public to rise to defend the “democracy and the integrity of our electoral process”.