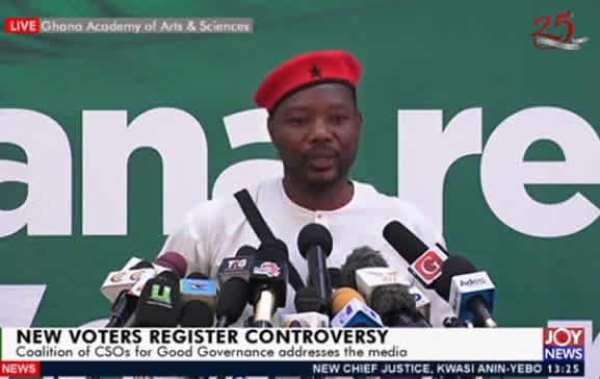 National Chairman of the People’s National Convention (PNC), Bernard Mornah, has said the decision by the Electoral Commission (EC) to go ahead with the compilation of a new register could “plunge this nation into calamity.”

Addressing the media at the Coalition of CSOs for Good Governance forum on Thursday, Mr Mornah claimed the EC has failed to stay neutral as it has collaborated with the incumbent government to disenfranchise certain citizens particularly in the oppositions’ dominated areas in the country.

He the comment on Thursday during a public forum by Coalition of CSOs for Good Governance in Accra.

The Electoral Commission in December petitioned Parliament to approve GH¢444,846,663 for the compilation of a new voters’ register arguing that fingers cannot be read on the old register.

The funds have been approved.

However, some opposition parties mainly, National Democratic Congress (NDC), All People’s Congress (APC) and People’s National Convention (PNC) have expressed their dissatisfaction with the decision.

They indicated they are unconvinced by the EC’s defence for the creation of a new register.

Commenting on this, the National Chairman of PNC alleged that people in Wa had to travel several kilometres to get registered due to frequent equipment failure, suggesting that there more important need for the funds that would be used to compile a new register.

Mr Mornah added that political parties cannot be assured that EC will not purposefully disenfranchise electorates in strongholds of opposition parties.

“We cannot allow them to do an exercise in an election year [else] we can doubt the outcome of the election.

“Citizens of this nation are peace-loving people all we are saying is that we don’t want a new voters' register because it is a potential for chaos in our nation,” he was categorical.