The Narrow Way Or Broadway 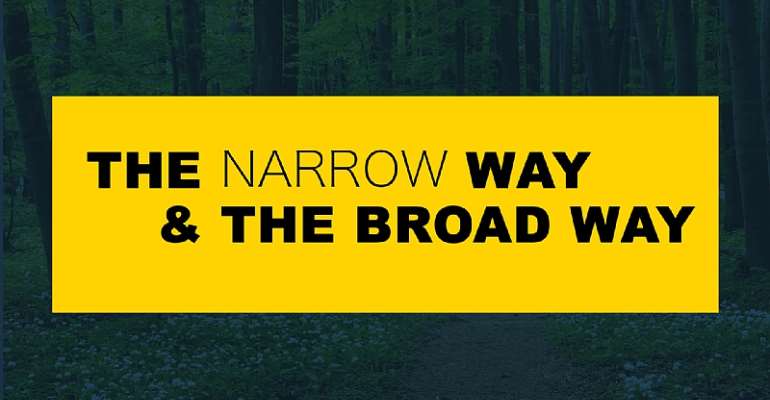 As many of you know, this is my last Sunday in Angola and the last time I will be worshipping with this Congregation in Angola. I have delivered over 30 sermons to this Congregation. On this last day, what can I say to my friends with whom I have worshipped for the past five years?

I have thought about that for several weeks. My first thought was to review my old sermons to see if I could summarize the essential themes and present them as one, final sermon. The other was to preach on the subject of Grace, based on my favorite hymn “Amazing Grace.” As I prayed over these ideas, the Lord had a better idea for me. On Sunday, September 26, 2010, I was in my local church in Missouri City, Texas, and when we were singing the hymn, “ He Lives,” and got to the part of the chorus where it says Christ walks and talks with me along life’s narrow way, I felt in me that that was my topic for today’s sermon.

Christ cautions us about entering through the wide gate and onto Broadway that leads to destruction. Many people are found on Broadway because it is easy to find. The Broadway crowd would have you believe that any lifestyle is acceptable to God as long as your heart is right with God, as if the human heart itself is capable of making things right with God outside the grace of God. It wants you to believe that it is not anyone’s business how it lives, and it sees nothing wrong with any lifestyle even if the Bible and Christian tradition are against it.

The Broadway crowd makes its own rules or has no rules, does its own things, and cares little or nothing about what God or anyone else thinks. It’s all about feeling good. That is not all, the Broadway crowd comes up with an almost convincing argument that a loving God would not condemn millions or perhaps billions of people to hell because they are not Christians. Surely, they reason, it makes sense that since there are many different people in this world from different cultures and countries, there must be various religions or diversity of worship that are acceptable to God.

This is Broadway talk. We did not learn that from Christ. Do not listen to them or join them. They ignore what Christ says that he is the way and that no one goes to the Father except through him (John 14:6). The Book of Proverbs also says that there is a way that seems right to a person, but it leads to death (Proverbs 14:12). The Bible text we read today (Matthew 7:13-23) tells us that not everyone who says “Lord, Lord” will enter heaven. When someone asked Jesus whether only a few people would be saved, he told the person to make every effort to enter through the narrow door because many will try to enter it and will not be able to do so. (Luke 13:23-24)

Have you thought about why Jesus followed up the statement about narrow way and Broadway with a warning about false prophets, instead of a direct warning about the devil? Jesus knows that some leaders with seemingly good intentions are going to lead others astray. He knows that some Christians will make a wrong turn or take the wrong exit off the narrow way and onto the enticing embrace of Broadway. He wants all of us to watch out for those leaders who would lead others astray.

Today, we have Broadway Christians who have been urged on by well-meaning leaders who have given them an overdose of tranquilizing, prosperity medicine, instead of diluting it with some of the weightier matters like salvation, suffering, service, and sacrifice. The life of Christ is a better model for us. He who could have had all the wealth in the world, and yet said to a man that foxes have holes and birds have nest, but the son of man has no place to lay his head (Matthew 8:20), would certainly be concerned about our misplaced priorities. Like the prodigal son, we need to make a U-turn, come back through the narrow gate and onto the narrow way.

It is a fact that people worship God for various reasons. Some people go from Church to Church hoping to hear from preachers whose sermons would satisfy their itching ears or whose miracles would meet their needs. They forget that the best sermons that have ever been preached and the greatest miracles that have ever been performed are all recorded in the Bible. Everything else, including this sermon, is just commentary. Some want salvation. Some want protection from their real or perceived enemies. Others want physical or spiritual healing or solutions to their many problems. Still others want success or prosperity. I believe there is room in God’s big tent for all who seek his grace in this present world.

However, if part of the reason is to be with God in heaven someday, then choose salvation, accept that Jesus is the way to the Father (John 14:6), enter by the narrow gate, and walk along the narrow way. The Broadway crowd and its leaders may project and glamorize some of the other reasons over and above the need for salvation, but we should not take salvation for granted. Salvation is so important that Paul strongly advised members of the Church at Philippi to continue to work out their own salvation with fear and trembling. (Philippians 2:12). As Jesus said, watch out for the false prophets and keep your eyes on the narrow way. The way may be narrow, but you will not walk alone. On the narrow way, the focus is on Jesus Christ, the Savior, not on personalities, miracles or great sermons.

Sometimes the narrow way may seem too narrow and the people too few to the point where you feel alone. You may feel like the only one among your close friends who strives to uphold the principles of holiness and a desire to please the Lord. It is very tempting for each of us to join the crowd. The Broadway crowd will make you feel or think that everybody is doing “it” and that you are the only one left behind. Do not worry; you are not alone and not everybody is doing “it.”

Remember that others before you have experienced that feeling of loneliness and survived the journey. Elijah felt that way. After he single-handedly defeated the 450 prophets of Baal by praying to God for fire to come down, the great prophet Elijah became afraid of the woman called Jezebel. Elijah became discouraged and told the Lord that he was the only righteous person left in the land and Jezebel was trying to kill him. The Lord told Elijah that he was not the only one, and that he, the Lord, had preserved 7,000 righteous people in Israel. (1 Kings Chapters 18-19).

Similarly, two disciples walking along the road to Emmaus felt alone, afraid, and confused. Jesus, the Savior, had been crucified, and they had heard that he had risen. As they discussed among themselves on the journey, a stranger joined them and participated in their conversation. That stranger was the risen Christ (Luke 24:13-35). The way may seem too narrow and the people too few, but we do not walk alone. Our Lord is always by our side.

Whatever our situation, we should stay on the narrow way. Paul advises us not to conform to the pattern of this world, but be transformed by the renewal of our minds (Romans 12:2). We are transformed by God through the power of the Holy Spirit, the Word of God, and constant fellowship with God and other Christians. Ironically, at a time when some people living in oppressive regimes and countries are burning Churches and persecuting Christians for attending Church services, some Broadway Christians living in the free world question the need to attend Church and refuse to attend Church services. King David, in all his majesty, was glad to leave his palace and go to the house of the Lord (Psalm 122:1). No wonder the Lord described David as a man after his own heart. (1 Samuel 13:14). You are here today, so you are not one of them. Do not be wise in your own eyes (Proverbs 3:7), keep coming to Church and God will bless you.

People on the narrow way are few and have a common purpose – to reach that glorious destination prepared by Christ for us. Because we are relatively few, we should get to know one another and bear one another’s burdens. Some may be strong or ahead. Others may be weak or far behind. If you are strong, do not pass by the weak. Walk side by side and shoulder to shoulder with the weak and, if necessary, carry the person on your shoulders. Enter by the narrow gate is a call to action. We must not stand at the gate or on the fence as spectators watching events happen. We must enter and actively participate in the Kingdom’s goals by helping one another.

Jesus Christ lives. Christ is the narrow gate. Enter through him for salvation, walk on the narrow way of righteousness and holiness with God, and you will be blessed with eternal life.

Dear friends, all of you know that I am nowhere near the Apostle Paul, and the thought of quoting him in this context makes me very uncomfortable. Nevertheless, as a sinner saved by grace with imperfections, I ask for your indulgence on this fitting occasion to conclude this sermon with the parting words of Paul to the Church at Philippi:

Finally, brothers, whatever is true, whatever is noble, whatever is right, whatever is pure, whatever is lovely, whatever is admirable – if anything is excellent or praiseworthy – think about such things. Whatever you learned or received or heard from me, or seen in me – put it into practice. And the God of peace will be with you. (Philippians 4:8-9 NIV). AMEN

Avoid greed, dishonesty and hypocrisy in galamsey fight – As...
34 minutes ago