Christians are more than conquerors 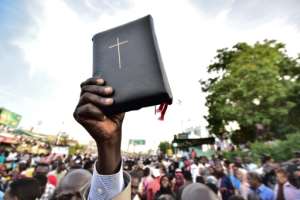 “37.No, in all these things we are more than conquerors through him who loved us. 38.For I am convinced that neither death nor life, neither angels nor demons, neither the present nor the future, nor any powers, 39.neither height nor depth, nor anything else in all creation, will be able to separate us from the love of God that is in Christ Jesus our Lord.” (Romans 8:37-39 NIV).

Paul was right when he first wrote it, and he is right today. He starts earlier from verse 28 that in all things God works for the good of those who love Him; and then asks that if God is for us, who can be against us? To stress his point, Paul asks further whether anyone or anything can separate us from the love of Christ. Paul is mindful of real world situations that could adversely affect all people generally, and Christians in particular. They include trouble, hardship, persecution, famine, nakedness, danger or sword; and quoting Psalm 44:22, he describes how Christians face death daily and are considered as sheep to be slaughtered.

Yet, “in all these things,” Paul says we are more than conquerors through Christ who loves us. He continues by specifying some additional things that threaten the love relationship such as death, demons, future, powers, heights, depths, and any other frightening thing in all creation.

For example, the fear of death is one of the most effective tools the devil and his forces use to intimidate people. Some people think the best way to defeat others is by killing them. In their evil minds, death silences their enemies forever. They should note that even in death, children of God are still victorious and maintain their love relationship with God because, like Abel, their blood may cry out to God (See Genesis 4:10). Similarly, when the religious leaders thought they could defeat and silence Jesus Christ by crucifying him on the cross, they did not know that they were rather empowering him. The resurrected Christ is more powerful than the Christ in human form that they killed. And the cross they wanted to use to humiliate him has become the iconic symbol of the Christian faith.

Christians are more than conquerors because even though we may walk through the valley of the shadow of death, we shall not fear any evil because the Lord is with us. (See Psalm 23:4). And he that is with us and within us is greater than the one who is in the world (see 1 John 4:4). That is why we have overcome the world.

Christ has turned upside down some of the commonly-held notions of many people. For example, Christ teaches that we should forgive those who wrong us; love our enemies; pray for those who mistreat or persecute us; and bless those who curse us (see, for example Luke 6:27-36). Strange as they may seem, those are some of the standards and behaviors that Christ wants his followers to adopt as the winning strategy to conquer the world. Christ also wants his followers to have peace in him, expect trouble in this world, and be rest assured that he has overcome the world (see John 16:33).

And so to be more than conquerors, we need a balanced diet of hard truths and positive messages that reflect the harsh realities of life. Christ the conquering messiah was also Christ the suffering servant. He endured pain and suffering for our sake, and came out stronger. It is Christ who turns our weaknesses into strengths, so that when we are weak, we are strong. Thus, God’s grace, endurance, and long suffering are some of the tools and ammunitions we need to conquer the world. That was how the martyrs of old did it, and we may need to emulate them as necessary.

By conventional wisdom, when a person is down during a struggle, he or she is considered defeated or conquered. Not so when the battle is the Lord’s and the person is a devout Christian. Devout Christians who are down – and down on their knees – are the most powerful and victorious people in this world. Down on our knees and with our eyes and hearts pointed heavenwards in communion with the Almighty God, victory is nurtured, blossomed, and matured into conquerors, even more than conquerors.

And if marching to awaken the spirit of militancy in us seems too tiring for some of us, what about standing up for Jesus the way the hymnist relied on Ephesians 6:10-17? “Stand up, stand up for Jesus, ye soldiers of the cross; lift high his royal banner, it must not suffer loss. From victory unto victory his army shall he lead, till every foe is vanquished, and Christ is Lord indeed.” (George Duffield, Jr. 1858; George Webb, 1830).

Above all, we should keep in mind the spiritual component of the struggle or battle. We do not wage war the way the world does because the weapons of our warfare are not physical or carnal, but spiritual, endowed with divine power to conquer the devil and his forces. (See 2 Corinthians 10:3-4). An example was during the struggle to rebuild the temple at Jerusalem after the people of Israel returned from captivity in Babylon; the Almighty God told Zerubbabel who was leading the efforts, “Not by might nor by power, but by Spirit.” (Zechariah 4:6 NIV). In other words, even the rebuilding of a physical structure like a temple was going to be accomplished not by human strength and efforts, but by God’s Spirit.

Last Sunday was Easter Sunday. However. Easter has not ended. Easter is not a historical event to be celebrated once a year. No, for Christians, Easter should be celebrated every day because the resurrected Christ reigns daily in our lives. That is why our Lord and Savior Jesus Christ says, “I am the resurrection and the life. He who believes in me will live, even though he dies; and whoever lives and believes in me will never die. Do you believe this?” (John 11:25-26 NIV). “And if the Spirit of him who raised Jesus from the dead is living in you, he who raised Christ from the dead will also give life to your mortal bodies through his Spirit, who lives in you.” (Romans 8:11 NIV). Even death does not have the final say in our lives; we live on, in victory.

Christians are not just conquerors; Christians are more than conquerors, and nothing can separate us from the love of God in Christ Jesus. May the resurrected Christ give all of us the power and Spirit to conquer sin, fear, death, and the devil. Happy Easter – every day.

'I know the general cost of living has gone up, my wife tell...
47 minutes ago