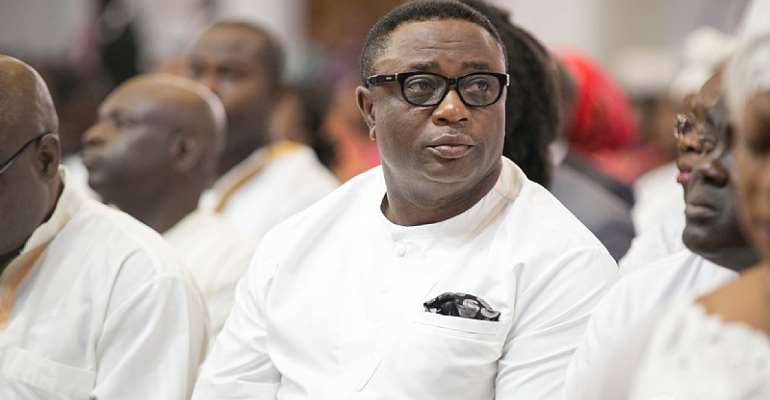 The Director of Elections of the National Democratic Congress (NDC), Mr. Elvis Afriyie Ankrah, still stands by comments he made in a leaked audio tape bordering on the proposed new voters’ register.

Mr. Afriyie Ankrah in the audio tape urged members of his party to reject the proposal by the Electoral Commission to compile a new voters’ register ahead of the 2020 polls.

Afriyie Ankrah in the tape which has gone viral urged the leadership of the NDC to spend about GHS1 million on a campaign to resist proposals for the new register.

The NDC’s Director of Elections in the tape said the party could invest about “200,000, 500,000 and One million Ghana cedis and fight this register, bring Accra to a standstill for once, occupy the EC head office. And we can do it. We have done it before, these are things we've been doing even as ordinary students; we brought the Ministry of Finance to a standstill.”

Speaking in an interview on Eyewitness News, Afriyie Ankrah said there was nothing wrong with his remarks.

According to him, the decision by the EC is a waste of time and resources hence his stance.

“This is not a leaked tape; I recorded myself and sent it to party members. I was speaking to my people and telling them that we have to resist it [the new voters’ register]. It was an open discussion on an open platform. It was a voice note on WhatsApp and so no one recorded it, I did it myself. Whether it was intended or not, it is in the public domain. The important thing is that there is nothing there that is wrong, I stand by every word that I said. You only regret if what you said was bad or there was something in it but in this case, we are going to come out publicly and activate these things so what is the big deal about it because we will occupy the streets of Ghana to demonstrate against the new register”.

“First of all, it is about the cost, it is a humongous cost which we think is completely unnecessary. Per the EC [estimation], it [voters’ register] was going to cost Ghc444 million but the last time we checked the documents which were taken to Parliament it was going to cost some Ghc800 million and that is good money that can be used for other purposes.”

When asked about his comment of occupying the EC office he responded by saying that his statement was “a statement of act” and not to be taken literally.

He further indicated that people who decide to twist his statement to suit their own purposes may not succeed since no demonstration could be done in private or hiding. Background

The Commission also says there is the need to replace outmoded biometric machines.

The NDC has expressed its opposition against the new register.

Addressing a press conference in Accra last Thursday, the General Secretary of the NDC, Johnson Asiedu Nketia, said the new register “defies logic and must be fiercely resisted as we in the NDC intend to do.”

In addition, he highlighted the novelty of an opposition party backing an older voters' register.

“We are not complaining. In fact, we are saying that, let us use the same register so that given the state of the shenanigans that were played by the NPP in 2016… we will see whether they can win again.”

The Director of Elections at the EC, Dr. Serebour Quaicoe has however justified the move, saying there was a need to tackle verification challenges that occur on election day.

“We have made it very clear that the current biometric system is not good enough for future activities. We are having a lot of challenges with it. In addition to that, a lot of people have found it difficult to have their fingerprints picked up by the machine so we intend to introduce the facial recognition [option] in addition so that if your fingerprint fails, your image will be used for verification.”

Dr. Serebour Quaicoe, also clarified that the said amount is not only for the procurement of equipment but to among other things cater for the full cost of undertaking a fresh registration exercise.