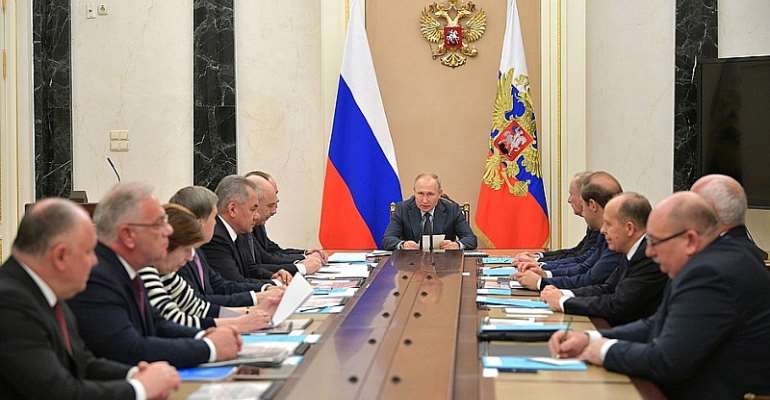 While chairing an end-of-year meeting with members of the Commission for Military Technical Cooperation with Foreign States, Russian President Vladimir Putin instructed the cabinet to step up efforts with exports of weapons and military equipment to "members of the Collective Security Treaty Organization (CSTO), the Commonweath of Independent States (CIS) and other traditional partners, in particular on the African continent."

"They account for more than a third of Russian military equipment exports. Our exports of weapons and military equipment have grown to a total of $13 billion this year. This is more than $2 billion more than in the same period last year. Russia’s position on the global arms market is strengthening despite the increased sanctions pressure and unfair competition," the president explained.

Putin however added: "I would like to say a few words about the recent Russian-African Summit in this context. It has reaffirmed that reliable and responsible military technical cooperation is a priority in our relations with our African partners. Based on the results of the summit, I would like to ask you to analyze the numerous proposals we have received for military technical cooperation, paying attention to their commercial value and applying flexible delivery and payment methods."

Over the past years, strengthening military-technical cooperation has been part of the foreign policy of the Russian Federation. Russia has organized a number of international trade fairs that contribute to promoting exports. During this year, for example, Russia was the venue of seven such events, including the Army-2019 International Military-Technical Forum, the International Maritime Defence Show in St Petersburg and the International Aviation and Space Salon MAKS-2019 held at Zhukovsky.

These fairs showed the latest achievements of the defence industry, including the latest fifth-generation Su-57 fighter plane, the Mi-38T helicopter with enhanced lifting power, the fourth-generation Viking medium range missile system, and the Tigr armoured vehicle, among others.

There have been highly positive results during the year. The overall portfolio of military contracts has been stable at more than $50 billion. A high demand for Russian defence products is a major impetus for improving the forms and methods of work to maintain the leading positions in this high-tech sector.

Putin previously called for reliance on the rich experience in this sphere and building up consistently military technology cooperation with foreign states. The renewed efforts, not only, in preserving, but also, in strengthening Russia’s leading position on the global arms market, primarily in the high-tech sector, amid tough competition.

According to him, Russia’s capabilities in the military technical sphere must be used to modernize and upgrade all the industries, to support science and to create a powerful technological potential for the dynamic development. Russian manufacturers have the advantage of an unfailingly high quality of products, which have no analogue in their combat and technical characteristics. Russia values its reputation for being a conscientious and responsible participant in military technology cooperation.

"We should analyse the situation on regional markets constantly, in real time, noting the buyers’ changing requirements and meeting their growing demand. The goals of the state policy in the field of military technical cooperation and the main spheres of our activities have been formalized in the military technical cooperation strategy approved in October. I would like to ask the Government to adopt a roadmap on its implementation," Putin instructed at the meeting, the full transcript of Putin’s speech published on the Kremlin website.