Let's deal with hypocrisy of non-political election at local level 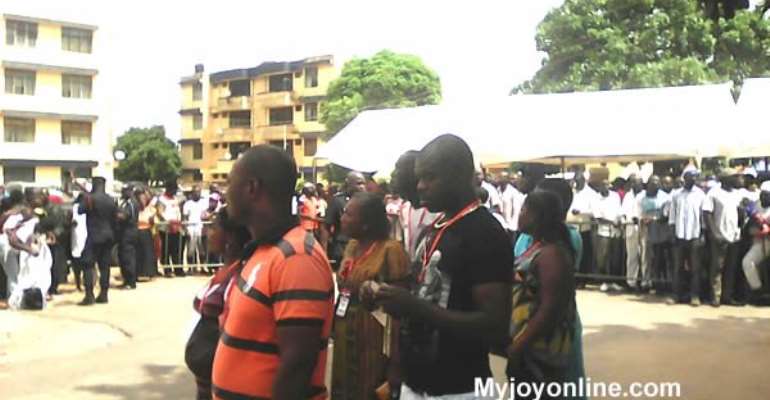 The President, Nana Akufo-Addo, has said its time for the country to deal with the hypocrisy of not wanting to make politicals at the local level non-partisan.

He told journalists at a press encounter at the Jubilee House Friday, that it puzzling that "at the national level party politics seem to be working. Ghana has a history in these past 25, 26 years, we have had three changes of government through the ballot box in this country."

The President admitted there have been challenges with electing leaders via the ballot box "but at the end of the day, we have been able as a people to use the ballot box to change government on a multi-party basis, the last change is the one that brought me to this house. It hasn't been done and threatened the integrity of our state or instability."

"And as I can see it, party politics has been a very important instrument in heightening public accountability in our country. It has made possible free expression and apart from everything else, also it has allowed people to associate for public purposes," President Akufo-Addo reiterated.

Electoral Commission (EC) on Thursday formally announced the cancellation of the referendum to amend article 55, clause 3 of the 1992 Constitution.

The EC Chair, Jean Mensah, in a signed statement said this followed the notification from the Speaker of Parliament on the withdrawal of the two bills that sought to amend articles 55 (3) and 243 (1) by the Attorney General and Minister of Justice, on the authority of the President.

This came after President Akufo-Addo on December 1, announced the withdrawal of the December 17 scheduled referendum. 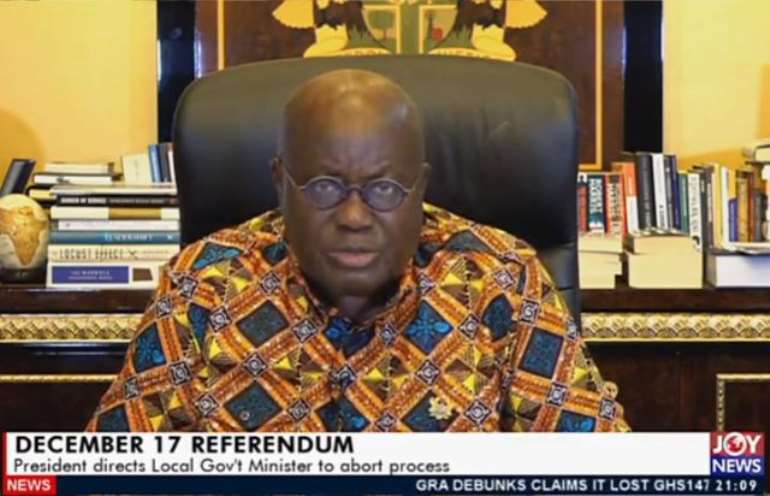 The withdrawal is to allow time for further consultations with key stakeholders and the public in general, he announced in a special Sunday broadcast to the nation.

The opposition National Democratic Congress (NDC) says it has constituted a team to engage government at its earliest convenience , to build the needed broad consensus for the issue of amendment of Article 55 (3) of the Constitution.

But answering questions from the media at the press encounter, the President said, "You join the party of your choice, nobody is forcing anybody to join any party, we do so as a voluntary act because we share common values. We are saying that is alright for the national level but for the local level somehow rather it becomes a ... and yet the national expression of multi-party democracy takes place at the local level.

“The very people who were going to vote for the DCEs [District Chief Executives] are the same people who vote for MPs [Members of Parliament] and they do it with ease every four years and nobody has a difficulty, from Abomosu, Anyinam or any of those places from where I come from in going to the ballot box in deciding they want to vote for ....so why would they have such a difficulty in voting for their District Chief Executives.

“A matter like this involving the revision or amendment of an entrenched clause of the constitution should be a party-driven affair, where one party will come, change an entrenched provision of the constitution and against the wish of another party and when that party when it gets its turn in government will then take us through the same proposal to replace it or restore it. I don't think that is the way we want to play with our constitution and it is the reason why I decided to call it off, we were going to have a YES or NO vote on party lines on such a sensitive and important issue,” he explained.

President Akufo-Addo said he will continue to work on a consensus and hopefully when a strong foundation has been built the matter will be revisited.

He was willing to "further engage with the NDC on the referendum in the future as all the formal processes for cancelling what would have taken place on Tuesday [December 17, 2019] has been done now.”