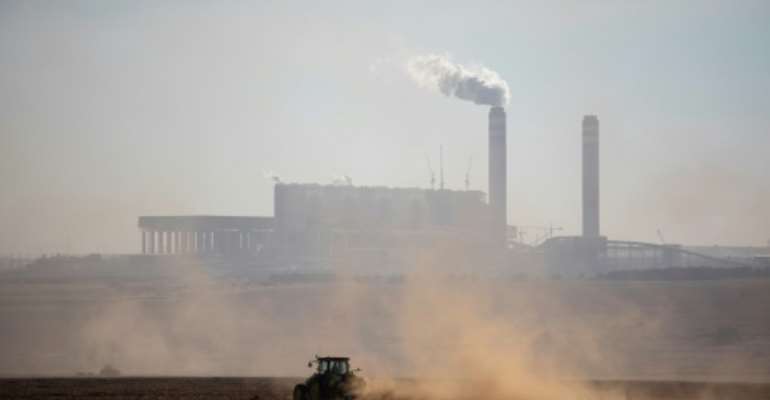 Choices made today on how to grow Africa's economies will determine not only if the continent prospers but if global warming can be tamed, diplomats and experts told AFP at UN climate talks in Madrid.

With two-thirds of its population lacking electricity, much of Africa's energy future remains a blank slate.

But unless the continent's leaders can forge a development pathway fuelled by clean and renewable energy, they risk following the same pollution-laden trajectory that causes two million premature deaths in India and China every year.

Growth driven by oil, gas and especially coal would also heat the planet well beyond the safety threshold dictated by science, and enshrined in the Paris climate treaty.

So far, Africa is essentially blameless when it comes to climate change.

The continent is home to 17 percent of the world's population and more than a quarter of its nations, but only accounts for four percent of the greenhouse gas emissions pushing the planet toward runaway warming.

Remove South Africa and the oil- and gas-fuelled economies of north Africa from the picture, and the share of CO2 pollution drops to one percent.

But this negligible carbon footprint is due mostly to poverty and underdevelopement -- something, experts say, that could rapidly change.

"Africans have not been responsible for the beginning of the story of the climate crisis, but they will have a huge impact on how the story ends," Mohamed Adow, Director of Power Shift Africa and a veteran of UN climate talks, told AFP.

"The continent is on the cusp of sweeping development that can either go down a clean energy path, or one based on fossil fuels."

'Not an outrageous ask'

As that transformation unfolds, Africa will accomodate at least half the projected global population growth over the next 30 years, according to the UN.

The number of people -- overwhelmingly young -- in Sub-Saharan Africa will likely double.

For Tosi Mpanu Mpanu, senior negotiator at the climate talks for the Democratic Republic of Congo, the path Africa takes depends heavily on the help it gets from other countries and international institutions.

"If we are going to live in a world where warming is limited to 1.5C, Africa has a role to play," he told journalists. "But we have to receive means of implementation, financial resources, technology transfer -- these are not outrageous asks."

Mohamed Nasr, an official in Egypt's foreign ministry and chair of the 54-nation Africa Group, a negotiating bloc at the climate talks, agrees.

"We need to understand the dilemma our policymakers are facing," he told journalists in Madrid.

"We want to take action on climate change," he said. "But poverty is very high, there is a need for education, for health care. And most African countries are highly indebted."

In many regions, the resources most readily available to fuel the growth that can satisfy those needs are the same ones overheating the planet.

On the one hand, Egypt has almost completed the world's largest solar park, with funding from the World Bank's investment arm, the International Finance Corporation.

But it's estimated 2,000 megawatt capacity will be dwarfed by the Hamrawein coal-powered station, under construction with funding from Chinese banks and state-run investment corporations.

China is also behind coal-fired development -- for electricity and to power mining operations -- in Tanzania, Zimbabwe, Malawi and Mozambique, according to the Global Coal Finance Tracker.

"Many of these projects would come online in the next five to ten years -- locking the countries into coal use precisely at the time when prices for solar and wind power are projected to fall below coal power."

Currently, South Africa is the only country on the continent with a large coal industry -- and all the public health problems that come with it.

"At the same time, there are budding renewable energy sectors and projects in Ethiopia, Kenya, Morocco and Algeria," noted Lauri Myllyvirta, lead analyst for the Centre for Research on Energy and Clean Air.

The tug-of-war across Africa between fossil fuels and renewables is sure to continue, and it may be years before a clear winner emerges.

For clean energy to prevail, however, the rest of the world must recognise the value of avoiding carbon emissions, not just cutting them, said Adow.

"The UN needs to incentivise Africa to stay on a clean path," he told AFP. "But to do this it needs finance and technology so it can leap-frog fossil fuels."