The life of an American library in Paris 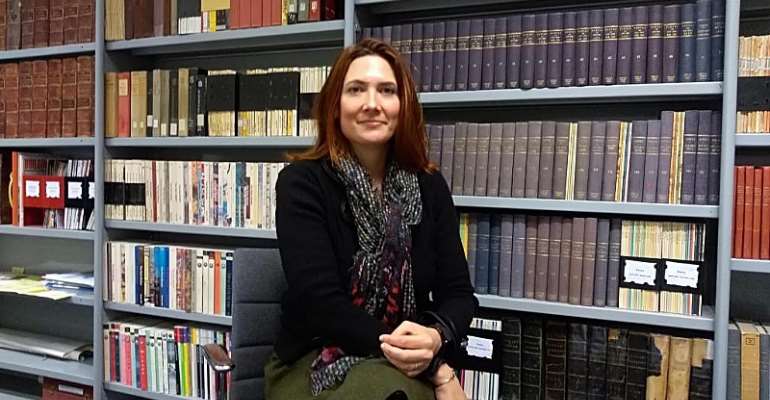 The American Library in Paris will celebrate its 100th anniversary next year. What is now a calm oasis of learning had its origins in the chaos of war, a fact underlined by a bust which sits among the dozens of books in the director's office.

Library Director, Audrey Chapuis, knows a lot of stories about the library's past. One concerns its origins, a century ago in 1920.

“That's the bust of Alan Seeger, a young American poet and soldier who died during the First World War. He famously wrote the poem “I have a Rendezvous with Death” before perishing in action in 1916. His father, Charles Seeger, was one of the Library's most important original supporters,” Chapuis says.

The library was founded at the end of the First World War. From 1917 to 1918, thousands of books donated by American libraries to United States armed forces, were shipped to service personnel stationed in France.

“At the end of the war, we had a depot in Paris and a group of dedicated supporters launched the library,” Chapuis says.

Over the past 100 years, the library has changed addresses, from Rue de l'Elysée in 1920 to the Champs Elysées in the 1950s to its current location on Rue du General Camou (in 1964) which is a stone's throw away from the Eiffel Tower.

“It's still very much at the heart of our mission. For example, we have a book award which celebrates distinguished books written in English about France,” she says.

The annual award is one of the many events that the library organises throughout the year.

“Our cultural programming is unparalleled. In general, we host two author events every week which is incredible considering our small staff. We do over 70 cultural programs per year and over 250 events for children and teens. We have over 12 book groups at the moment,” Chapuis says.

Over the years, the library has been graced by the presence of renowned American writers like Ernest Hemingway and Gertrude Stein who wrote for the library's newsletter Ex Libris, which continues to be published even today.

Edith Wharton, the first woman to win the Pulitzer Prize for Literature, was one of the founding trustees. James Jones, Art Buchwald and Samuel Beckett were some of the active library members.

The library's rich history includes stories about how it continued to function during the Second World War when Paris was under the occupation of the German army. Some of these stories form the basis of the novel The Paris Library by Janet Skeslien Charles, which will be published in June 2020.

100 years on
So what does the library represent as it enters its centenary? According to Chapuis, the institution stands for limitless things to different people.

“It is sort of a home away from home, an oasis. It's a safe and welcoming space. It's a place where you can have difficult conversations. For me, the community aspect is one of its most important functions. It's a place that welcomes everyone… families, readers, thinkers and writers. It's pretty much what you need it to be it can be,” she says.

Chapuis also mentions that though there is 'American' in its name, the library is open to all.

“There is probably something American in our service ethic and ethos. We are very welcoming. Kindness is very important in what we do. But beyond that we are truly international and open to everyone,” she says.

One of the challenges the library faces today relates to fundraising.

The institution, which is Europe's largest English library outside the UK, currently boasts 4500 members and has a collection of 100,000 books. While membership is required to access the library and its resources during the day, the evening programming is free and open to the public.