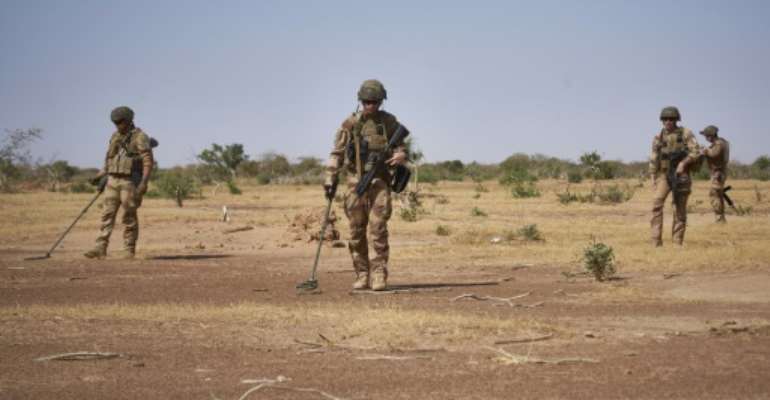 French soldiers use detectors while searching for IEDs (Improvised Explosive Devices), which kill scores each year in the jihadist-hit Sahel region. By MICHELE CATTANI (AFP)

The unit commander's order crackles over the radio and the column of French armoured vehicles en route between Burkina Faso and Mali comes to a sudden halt.

In the Sahel scrub some 50 kilometres (31 miles) from Deou, in northern Burkina Faso, the vehicles fall into a semi-circle.

Eight military engineers step out and walk in an inverted-V formation, metal detectors in hand, in a routine performed so often that its life-or-death importance is easily forgotten.

They are searching for IEDs, or Improvised Explosive Devices - a major threat to civilians and soldiers in a region struggling with a growing jihadist insurgency.

"We look for possible traces," says Tanguy, an officer and section leader who only gives his first name. 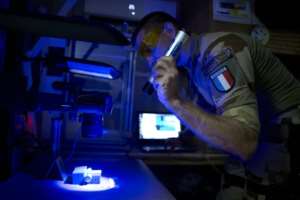 French troops use a ultraviolet light and other tools to investigate fingerprints and other clues on bomb making materials. By MICHELE CATTANI (AFP)

The hidden homemade bombs -- simple to make, and highly effective -- kill and maim scores of victims every year.

Thousands of civilians and soldiers have died in violence across the Sahel which began when armed Islamists revolted in northern Mali in 2012.

The conflict has since spread to the centre of Mali and to neighbouring Burkina Faso and Niger. Attacks abound, despite the 4,500 French troops deployed in the region as part of Operation Barkhane to help local forces.

Numbering in the low thousands, according to some estimates, the jidahists are linked to a mosaic of different groups, such as al-Qaeda, the Islamic State and Ansarul Islam.

Laying roadside bombs has become one of the militants' favoured means of attack against the tens of thousands of local and foreign troops operating in the region.

It's an effective tactic. 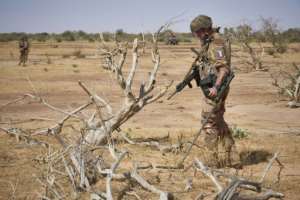 Homemade mines and bombs have killed 13 out of the 41 French soldiers who have died in Mali since 2013. By MICHELE CATTANI (AFP)

The bombs have killed 13 out of the 41 French soldiers who have died in Mali since 2013. Only on Monday, an IED killed two Malian soldiers.

Four Malian soldiers in total have died in roadside bombings since last month, as well as two soldiers from Burkina Faso and one French soldier.

Civilians are not spared the carnage. According to a United Nations report from October, IEDs caused some 110 civilian casualties in Mali in the first half of 2019.

"They don't dare attack us head on, they're too poorly equipped," says Thierry, a French officer and demolition-control expert.

A Burkina Faso officer named Etienne said the IEDs "drive us crazy from not being able to do anything (in response)".

Barkhane runs a special laboratory to analyse the bombs, in Gao, a town in northeastern Mali which is the French army's main operational base in the Sahel.

Called the Counter-IED Exploitation Laboratory (CIEL), it is one of only two such facilities in the Sahel. There is a similar American lab in Burkina Faso's capital Ouagadougou. 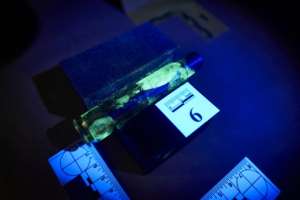 Fingerprints analysis is one part of the investigations into IEDs. By MICHELE CATTANI (AFP)

In Gao, four soldiers sift through dozens of objects every week, gathered during ground operations. From motorbike parts to bullet casings and the remains of IEDs, everything is deconstructed, analysed and studied.

The objects are first x-rayed to see how dangerous they are. Then, fingerprints are taken and the components undergo chemical analysis before, finally, the soldiers investigate the detonator mechanism.

"We can get DNA samples from the bombers which will then be forwarded to other services," says Lionel, an officer, ultraviolet lamp in hand, referring to military intelligence.

A cartridge is placed before him inside his cramped office.

He switches off the light and turns on the ultraviolet lamp. Fingerprints appear on the cartridge in fluorescent green. "It's like at a discotheque," he says, smiling.

Pascal, a captain in charge of the lab, says that the aim of the facility is to get "quick results to report to the hierarchy, and to adapt to attacks". 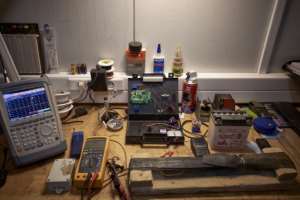 Militants tended to use remote detonators between 2017 and 2018, he said, until the French began installing signal scramblers on their vehicles.

Now they tend to use pressure plates, which detonate a charge when pressure -- such as the weight of a vehicle -- is applied to them.

"Telephones are used less and less, often because phone networks send out spam SMS messages that can trigger the (detonation) mechanism," says David, an officer and lab electrician.

Demining alone is not a longterm solution, however. "Today, we fight the IEDs to avoid becoming targets," says Thierry, the officer.

"But tomorrow, we will have to attack the network, the bombers, the traffickers".