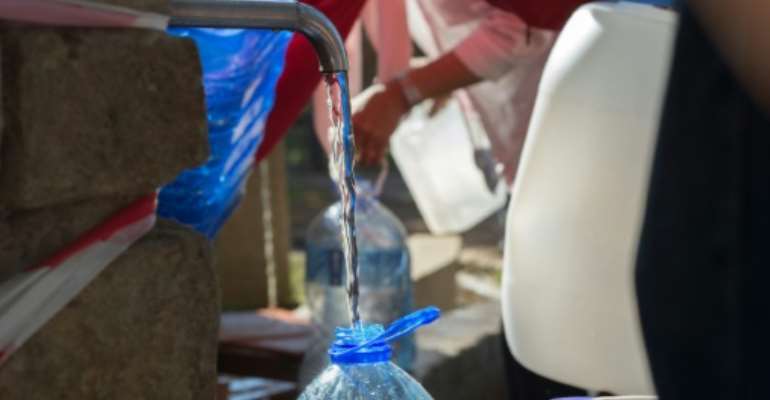 People queue up to collect drinking water from taps that are fed by a spring in Newlands in 2017. By Rodger BOSCH (AFP/File)

South Africa's water affairs minister on Monday urged citizens to use water sparingly as water restrictions and the effects of climate change creep in.

Intermittent water shortages have left neighbourhoods in the central and northern regions of South Africa without water over the past week as the country reels from a string of heatwaves.

"We have to immediately begin to disaster proof South Africa and South Africa's security of water," Sisulu told journalists in Johannesburg.

"We are working hard to avoid the much-dreaded Day Zero phenomenon and instead we are announcing restrictions on water usage."

South Africa has imposed water restrictions in major metros, as a cautionary measure.

In the capital Pretoria, taps ran dry last week in the suburb of Laudium as a result of dwindling supplies, infrastructure failure among other issues at the country's largest water utility and supplies, Rand water.

Sisulu, 65, has come under fire for not doing enough to ensure water flows in the urban areas.

But many parts of the country including the Eastern and Northern Cape, have endured drought conditions for months, resulting in livestock deaths and failed crops.

"Climate change is a reality and it is affecting South Africa in this way," Sisulu noted.

Dam levels across the country have dropped by 10 to 60 percent compared to 2018, according to a recent report by the water department.

Sisulu called for calm saying "there is no need to panic, but there is a need to be prudent in the way that we use water".

The earliest rains were expected in December, "so we are in for a long dry season," that would be "getting longer, more intense and more frequent," she said.

The minister will announce a water plan next month.

South Africa is a water-scarce country and it recorded the lowest annual rainfall in more than a century in 2015.