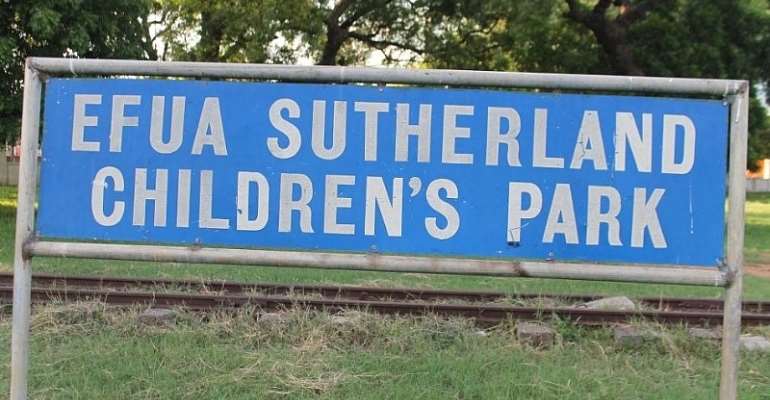 Globally, amusement parks are created to feature various attractions for recreational purposes and whether or not such parks are named after renowned personalities, they are maintained so their existence does not deviate from the purpose for which they were established.

Ghana has numerous of such amusement parks and other interesting places but they are gradually deviating from their main purpose of establishment because of lack of maintenance yet the political authorities continue to name and rename some of these assets after people of interest to them. One of such amusement parks in the heart of Accra -near the national theatre- that has deviated from its purpose due to lack of maintenance is the Efua Sutherland Children’s Park. In its current sorry state, the park can best be described as Efua Sutherland Children’s Forest Reserve or reptiles’ village.

The children’s park is a 14.83-acre (0.0600 km2) public amusement park for children which was started in 1979. Initially, it was called Accra Children’s Park or Ridge Park. It was later renamed after a renowned Ghanaian of blessed memory called Efua Sutherland who was born as Efua Theodora Morgue. She lived from 1924 to 1996.

Efua Sutherland was a very dutiful and studious woman of many enviable parts. She was a playwright, play director, dramatist, children’s author and child advocate, poet, educationist, researcher and a cultural activist. Her literally works such as Edufa (1967) and Marriage of Anansewa (1975) add to her legacy memorably and especially in the Ghanaian educational system. Briefly, Efua Sutherland can be called the mother of modern Ghanaian theatre as she did a lot of work in that direction by founding the Ghana Drama Studio now replaced by the national theatre, the Ghana Society of Writers (now Association of Ghana Writers) and the Community Experimental Theatre. She also established Afram Publications in 1970 as a pioneer publisher in Ghana. These are just a few of the Sutherlandan achievements.

It is not for nothing that apart from the children’s park in Accra, the following other national assets or public spaces both in and outside Ghana are named after this astute lady of a sort.

It is therefore an eye sore and quite disheartening that the usual lack of maintenance culture within the various echelons of the Ghanaian society has led to the current dilapidated status of a Children’s Park named after such an important personality of international repute who hailed from Ghana and walked the soil of our nook and cranny. Due to lack of maintenance, the Efua Sutherland Children’s Park meant to entertain children in the name of this well celebrated child advocate has become a forest or a habitat for reptiles right in the heart of Accra.

The continuous neglect of the park goes to demonstrate how we do not cherish Efua Sutherland’s memory or good works and how we do not value the needs of children let alone pay attention to their recreational needs.

I was therefore not surprised but I was equally not enthused to read in the media the other day that the family of the celebrated Efua Sutherland had threatened to withdraw her name from the Children’s Park because the Park has become an otiose because not even a diminutive portion of it has received any meaningful renovations lately. The recreational facilities at the Park are virtually non-existent as they have broken down. I thus agree substantially with the Efua Sutherland Family and mutatis mutandis that the name of the Children’s Park can be changed by withdrawing Efua’s name from it but it will remain a useless Children’s Park if not maintained. Efua Sutherland herself would have made progressive efforts to revamp the Park if she were to be alive and in her active days.

It is a shame that even the Dutch named and maintained a street for Efua Sutherland in Amsterdam but Ghanaians themselves are unable to maintain a Children’s Park in her name. It is also laughable that our Department of Parks and Gardens itself is virtually dysfunctional yet people sit there and are paid salaries. Perhaps we should learn more from the turnaround stories of the Ghana Post Office and the Ghana Publishing or Assembly Press, which are facelifted and not outdated by technological advancement.

Encouraged by my personal philosophy that he who criticizes must also offer or proffer solutions to a problem, I recommend the following options for revamping the dilapidated Efua Sutherland Children’s Park.

Ken Agyapong is only brave on NET2 TV but actually a coward ...
5 minutes ago