UK Brexit vote blocked as EU mulls yet another extension 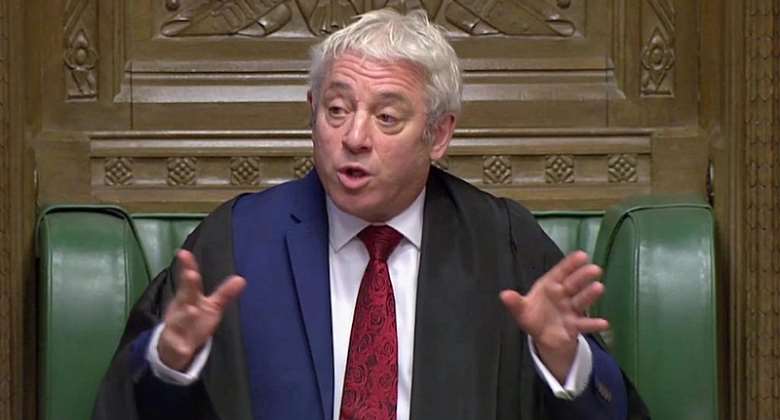 British House of Commons Speaker John Bercow blocked Prime Minister Boris Johnson from holding a vote on Monday on his new Brexit deal, as Johnson says the European Union is mulling over his request for yet another delay to leave the EU.

"Nothing in what I have said in any way impinges upon the opportunity for the government to secure approval of its deal and the passage of the appropriate legislation by the end of the month. If the government has got the numbers, the government can have their way," Bercow told parliament.

"There is every opportunity for the government, with the support of the House, not only to have its say but to get its way by the end of October," he added, underlining the fact that this does not kill the Brexit deal.

France's President Emmanuel Macron told Johnson over the phone last weekend that a delay is in no one's interest.

Presidential spokesperson Sibeth Ndiaye reinforced Macron's words on Monday after a cabinet meeting, telling journalists, "it's now up to the British parliament to say what it thinks, it's no longer up to the European Union.”

"So a vote needs to be taken on the heart of the matter, not just stalling tactics to gain time," she added.

French junior minister for European Affairs, Amelie de Montchalin, told French broadcaster BFM TV that there would have to be some reason for a delay, like a parliamentary election, in order to allow further time.

But German Chancellor Angela Merkel is reportedly looking favorably at a possible delay until February.

The letter Johnson gave to the EU, which he previously said he'd “rather be dead in a ditch”, was part of new legislation that he would have to write to EU leaders to ask for an extension until January 2020.

If the EU gives a different date, the prime minister must accept it or persuade the House of Commons otherwise.

Johnson had previously said that he hoped the EU would only give a technical extension, which would give parliament the time to pass the deal if it is finally given the green light.