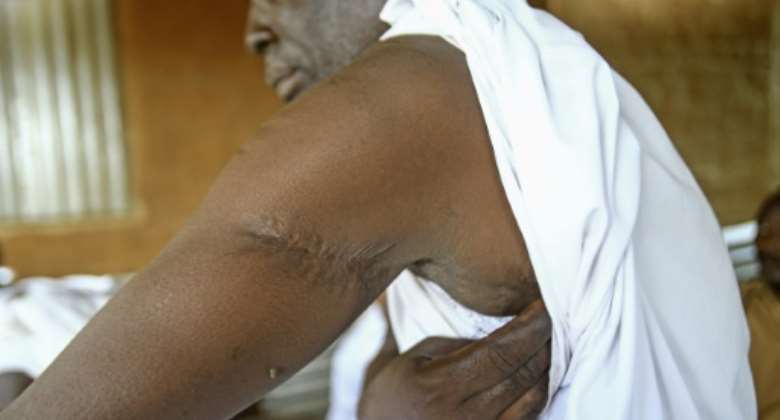 Hundreds of thousands of victims of the conflict in Darfur live in camps for the displaced like Camp Kalma near Niyala. By ASHRAF SHAZLY (AFP/File)

For Jamal Ibrahim, whose sisters were raped by militiamen in Darfur, only the handover of Sudan's ousted dictator Omar al-Bashir to the International Criminal Court can bring peace to the restive Darfur region.

"Two of my sisters were raped in front of my eyes by militiamen who stormed through our village, setting our houses on fire," Ibrahim, 34, told AFP at Camp Kalma, a sprawling facility where tens of thousands of people displaced by the conflict in Darfur have lived for years.

"Bashir and his aides who committed the crimes in Darfur must be handed over to the ICC if peace is to be established in the region."

Ibrahim, who is from Mershing in the mountainous Jebel Marra area of Darfur, said his village was attacked by Arab militiamen in March 2003 soon after conflict erupted in the region.

The fighting broke out when ethnic African rebels took up arms against Khartoum's then Arab-dominated government under Bashir, alleging racial discrimination, marginalisation and exclusion.

Khartoum responded by unleashing the Janjaweed, a group of mostly Arab raiding nomads that it recruited and armed to create a militia of gunmen who were often mounted on horses or camels.

The militiamen unleashed by ex-leader Omar al-Bashir in response to armed rebellion in Darfur are accused of carrying out a brutal scorched-earth campaign, raping, killing, looting and burning villages. By ASHRAF SHAZLY (AFP/File)

They have been accused of applying a scorched earth policy against ethnic groups suspected of supporting the rebels -- raping, killing, looting and burning villages.

The brutal campaign earned Bashir and others arrest warrants from The Hague-based ICC for genocide, war crimes and crimes against humanity.

About 300,000 people have been killed and 2.5 million displaced in the conflict, the United Nations says.

Bashir, who denies the ICC charges, was ousted by the army in April after months of nationwide protests against his ironfisted rule of three decades.

He is currently on trial in Khartoum on charges of corruption, but war victims like Ibrahim want the ex-leader to stand trial at the ICC, something the northeast African country's new authorities have so far resisted.

Camp Kalma is one of the largest facilities hosting people displaced by the Darfur conflict. By ASHRAF SHAZLY (AFP/File)

Ibrahim said his father and his uncle were shot dead when militiamen, riding on camels, rampaged through their village.

"We fled from there... and came to this camp. Since then we have not returned to our village," Ibrahim told an AFP correspondent who visited Camp Kalma last week.

Established near Niyala, the provincial capital of South Darfur state, Camp Kalma is one of the largest facilities hosting people displaced by the conflict.

It is a sprawling complex of dusty tracks lined with mud and brick structures, including a school, a medical centre and a thriving market, where everything from clothes to mobile phones are sold.

Hundreds of thousands of Darfur victims live in such camps, subsisting on aid provided by the UN and other international organisations.

In Camp Kalma, hundreds of women and children queue up daily to collect their monthly quota of food aid.

"Often the officials here tell us that we must return to our village, but we can't because our lands are occupied by others," said a visibly angry Amina Mohamed, referring to Arab pastoralists who now occupy large swathes of land that previously belonged to people from Darfur.

"We won't accept any peace deal unless we get back our land. We will leave this camp only when those who committed the crimes are taken to the ICC."

Even as instances of violence in Darfur, a region the size of Spain, have fallen in recent years, there are still regular skirmishes between militiamen fighting for resources and livestock.

Sudan's new transitional authorities have vowed to bring peace to Darfur and two other conflict zones of Blue Nile and South Kordofan.

Sudan's transitional authorities vowed to bring peace to Darfur and two other conflict zones, but residents of Camp Kalma are not convinced. By ASHRAF SHAZLY (AFP/File)

A Sudanese delegation led by generals and government officials is currently holding peace talks in the South Sudan capital of Juba with two umbrella rebel groups that fought Bashir's forces in these three regions.

On Wednesday, the chief of Sudan's ruling sovereign council, General Abdel Fattah al-Burhan, announced a "permanent ceasefire" in the three regions to show that authorities are committed to establishing peace.

But residents of Camp Kalma are not convinced, with hundreds of them staging a protest against the talks in Juba.

Musa Adam, 59, who hails from the village of Dilej but has lived in Camp Kalma for years, is in no mood to forgive Bashir.

Seven members of his family were shot dead by militiamen when they raided his village in 2003, Adam said.

"I know those militia leaders... I am ready to testify at the ICC against them as a witness to their crimes," he said.

"Until these criminals are taken to the ICC, we cannot have peace in Darfur."