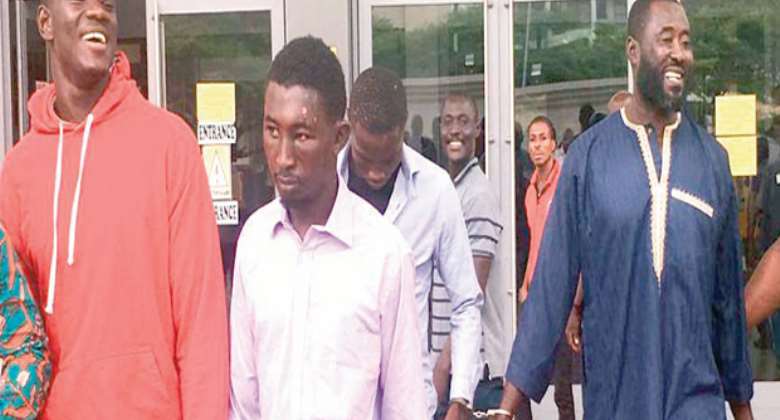 The Office of the Attorney General (AG) has dropped all charges against four out of the eight persons arrested for allegedly kidnapping two Canadian girls in Kumasi in June this year.

The four were alleged to be part of a kidnapping syndicate which had planned for few months how they were going to kidnap white foreigners in Ghana and make their relatives pay some monies as ransom before releasing them.

Among the four who were discharged by the court yesterday was Seidu Abubakari aka Nba, who was initially suspected to be the ring leader of the kidnapping gang.

The others who were discharged are Abdul Nasir, Safianu Abubakar and Abdul Rahman Suleimana aka Wofa.

The remaining four being held for the kidnapping are a Ghanaian called Yussif Yakubu, 28, together with three Nigerians, namely Sampson Aghalor, 27, computer engineer; Elvis Ojiyorwe, 27, businessman; and Jeff Omarsa, 28.

All the eight suspects were initially charged for allegedly conspiring to kidnap the young ladies, who were in the country for volunteering works and later demanded a ransom of US$800,000 from their parents.

They pleaded not guilty to the charges at the beginning of the trial and their various lawyers managed to secure bail for them but none was able to meet the bail conditions set by the court.

Review
Hilda Craig, a senior state attorney, told the court that the decision by the AG to drop the charges against the four followed a review of the case docket that was presented to the AG's Department.

The court presided over by Justice George Buadi subsequently discharged the four accused persons to the delight of their relatives, one of whom screamed, “We thank God, God bless you!”

Fresh Charges
Currently, Sampson Aghalor, Elvis Ojiyorwe, Jeff Omarsa, and Yussif Yakubu have each been charged with two counts of conspiracy and another two counts of kidnapping.

They all pleaded not guilty to the charges.
The four who were initially in the custody of the Bureau of National Investigations (CID) have been taken into the Nsawam Medium Prison.

New Facts
Further investigations into the matter have revealed some harrowing information about how the four accused persons strategised and executed their plans.

According to Mrs. Craig, Sampson Aghalor and Yussif Yakubu struck acquaintance sometime in March 2019 after the latter had supplied him with a pistol and 40 rounds of ammunition at a cost of GH¢3,700.

She said Sampson later discussed his plans of kidnapping a white man in Ghana in order to obtain what he termed 'serial numbers' from him.

Subsequent to that, he went back to Nigeria and sold his idea to Jeff Omarsa and Elvis Ojiyorwe, both of whom decided to follow him to Ghana to carry it out.

She said in June, the four accused persons armed with pistols rented a vehicle and went to town for a shooting practice after which they went in search of white people to kidnap.

They met the two Canadian ladies, Lauren Tilley and Bailey Chitty, who were in an Uber vehicle and kidnapped them just as they alighted from the vehicle amidst shootings.

The two ladies were taken to an uncompleted building at Amoam Achiase in the Kwabre District where they were blindfolded, tied and threatened with knives and guns.

Ransom
Mrs. Craig told the court that the accused persons then demanded a ransom of $800,000 from the relatives of the victims, and threatened to kill them if the money was not sent to them.

They were said to have also touched the ladies inappropriately and threatened to have sex with them.

She said in a bid to get the parents to pay the ransom, the accused persons smeared the victims with the blood of a fowl, took pictures of them and forwarded them to their parents.

Arrest
The four were arrested after Yussif Yakubu was captured by a joint security team on June 11, and he led the team to arrest the other suspects.

The accused persons are said to have exchanged gun fire with the joint security team and threatened to kill the ladies if the team came closer.

The case was adjourned to October 31.
BY Gibril Abdul Razak & Juliana Tamatey