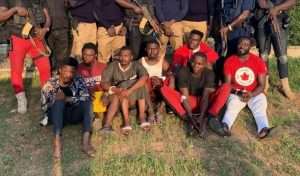 Fresh reports has emerged that the kidnappers of the two Canadian women in the Ashanti Region last week demanded $800,000 ransom.

This was brought to light when six of the eight suspects arrested in connection with the crime were put before an Accra High Court today, Friday.

The six were three Nigerians and three Ghanaians.

Citi News' Fred Djabanor who was in court said the six suspects have been charged with kidnapping and conspiracy to kidnap.

Details about how the suspects got involved in the crime as narrated in court by the prosecution who said one of the arrested Nigerians, Sampson Aghaloro, 27 years and a Ghanaian, Yusif Yakubu, 28 years met and became friends in March 2019 and once had a discussion about how to make money.

The brief in court said, in the course of the discussion, one of the things that came up was to venture into kidnapping to make money.

They recruited four other people to join them in this kidnapping agenda.

Sampson Aghaloro then invited two other Nigerians from Nigeria while the other two were met in Ghana.

On June 4, 2019, the suspects were said to have rented a vehicle, a Toyota Corolla and went into a search for a victim.

While roaming the town, they came across these two Canadians who had just sat in an Uber.

They followed the Uber and accosted the victims at the hostel where they reside.

After seizing the two Canadians, the prosecutor said they drove the victims to an uncompleted building in Kumasi and got in touch with their family members and decided to ask for an $800,000 ransom.

The prosecution added that while discussing the ransom, the security had the intelligence and went in to rescue the Canadians.

Citi News’ Fred Djabanor reported that out of the six suspects, only Seidu Abubakari, had legal representation in court.

More from Headlines
ModernGhana Links
Payment of staff performance bonus is in fulfillment of the Collective Agreement — GPHA
Parliament got it wrong when it approved Ken Ofori-Atta as Finance Minister – Ricketts-Hagan
Both Majority and Minority in Parliament have failed; they don’t appreciate the mandate given to them – Prof. Gyampo
TOP STORIES

Government urged to exempt health professionals from public ...
2 hours ago