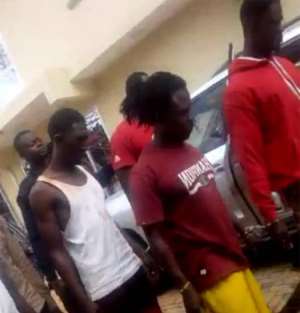 DAILY GUIDE reports reveal the third lady was sped off by the Uber driver after the kidnappers had kidnapped the two other ladies – Bailey Chitty and Lauren Tilley.

According to reports, the Uber driver drove the third Canadian to the police station, where she lodged a complaint.

This important information was relayed to DAILY GUIDE by a top police officer in the Ashanti Region on condition of anonymity.

He said the three Canadian ladies were travelling from Asokwa, a surbub of Kumasi, to their hostel at Danyame. Unknown to the three ladies, the kidnappers were following their vehicle with a red Toyota Corolla car with registration number AS 6149-19. They trailed the Uber from Stadium to Asokwa Interchange and Ahodwo Roundabout and finally to their hostel.

Upon reaching the hostel, the two Canadian ladies, who were seated at the back of the Uber, got down first from the car. The kidnappers, who had reached the hostel by the time, quickly bundled the two girls into their waiting vehicle.

A man believed to be a security man at the hostel reportedly tried to confront the kidnappers, perhaps to rescue the girls, but he stopped immediately after the kidnappers had pointed a gun at him and sternly warned him to stay away.

Having sensed danger, the Uber driver sped away with the third Canadian lady, who was seated in the front. The kidnappers then turned their car away and took the same route that they had used to follow the ladies at top speed.

The Uber driver then drove the lady to the police station, where an official complaint was made.

The parents of the rescued Canadian ladies have expressed gratitude to the security personnel who saved their children, and the Ghanaian government for its commitment towards the positive outcome of the operation.

Through email, the Canadian government has also thanked its Ghanaian counterpart for the cooperation showed throughout the ordeal.