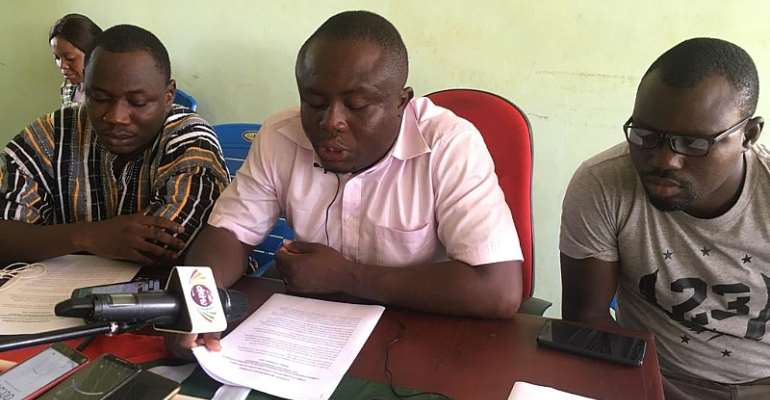 The National Democratic Congress (NDC) has accused the Upper West Regional Chairman of the New Patriotic Party (NPP), Saanbaye B. Kangbaree of making unsavory comments that threatens the life of the Member of Parliament (MP) for the Daffiama Busie Issa constituency.

The Upper West Regional Communications Officer of the NDC, Prosper Puo-ire, who spoke at a press conference alleged that the chairman granted an interview at a Wa based local radio station where he said an unfortunate incident may happen in the Daffiama-Busie-Issah constituency that will lead to the NPP annexing that parliamentary seat which is currently occupied by the opposition NDC's Dr. Sabastian Sandaare.

“Mr. S.B Kangberee in his usual disposition went ahead to insinuate that the current occupant of the DBI seat in parliament can die any moment soon or could be incapacitated for that seat to be vacant. The NDC in the region takes a very serious exception at such a measure of recklessness from a front figure of his caliber as he is expected to know better and act responsibly. We condemn such recklessness in no uncertain terms and wish to draw the chairman's attention to the fact that the NDC painfully lost our hardworking chairman of the same constituency in very bizarre circumstances.”

Prosper Puo-ire called on the security to immediately pick up the chairman for interrogations or the NDC will be compelled to resort to “any legitimate means” to protect the lawmaker.

“The NDC by this conference is calling on the law enforcement agencies to lift up their professionalism, investigate and intensify surveillance on Mr.Kangberee and his assigns or we will do whatever legitimate to protect our MP. For now, I enjoin the constituents to hold the chairman responsible for the safety and security of their MP”.

The Upper West Regional Communication officer of the NPP, Bukari Ali in a sharp rebuttal described the concerns as “red hearing” that is misconstrued to cause disaffection for the chairman.

He said the chairman was responding to a question from a show host on the local radio station.

“Our chairman spoke in that manner because of the kind question the presenter posed to him. How can he be plotting to kill someone and be speaking to the media about it? I think the press conference was a diversionary tactic employed by our opponents because they simply cannot stand the wait of the chairman”.

Bukari Ali further opined that his party will win the Bussie seat because of the stature of their parliamentary candidate and not through any foul means.