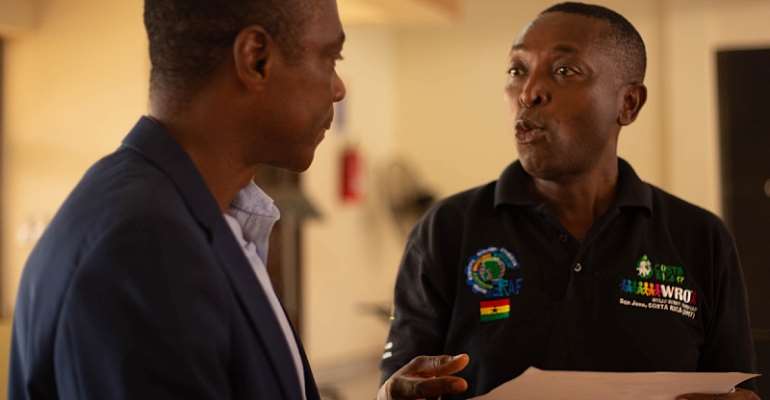 The Christian Service University College (CSUC) has formalised its relationship with the Ghana Robotics Academy Foundation (GRAF) with a memorandum of understanding to promote robotics inspired education among Ghanaian learners.

The process which was initiated on behalf of CSUC by the Centre for Research and Business Development after weeks of discussions, was completed during the recent middle sector High School robotics competition involving Ashanti and Brong Ahafo on Wednesday 2 October 2019.

By the terms of the MOU, GRAF has granted CSUC the rights to be a focal point to train and support learners (from elementary level through to university) educational institutions, neighbourhood clubs, religious groups, etc., from Ashanti Region to the northern parts of the country.

For CSUC, this new partnership is in line with the vision to empower people to impact the world as a university of choice. Prior to signing the MOU, the two organisations had already organised a boot camp in August 2019 at CSUC that trained robotics trainers for the task ahead.

Robotics incorporates a range of skills, and promotes a learning environment for people with different talents. As part of their preparations, students are made to work in teams to solve specific problems provided in advance.

Robotics inspired education enables participants to combine creative thinking with hands-on engagement. While students employ teamwork, and engage in programming their robots to solve the problem they have been given, they develop essential skills by having to think through the problem strategically with a focus on logical reasoning, analytical reasoning, and critical thinking. The development of this ability is crucial for both academic and professional success, not limited to critical science fields, but also for non-science fields.

During the recent competition, staff of the CSUC Computer Science Department prepared two teams that represented Our Lady of Grace High School. The Department also provided an official who served as one of the judges to oversee the successful running of the programme.

It would be noted that in May this year, Ghana’s team prepared by GRAF won the 2019 Robofest World Championship held in Michigan, US, by beating their counterparts from the US, Japan, China, and South Korea among others. This year’s participants have the opportunity to represent Ghana in subsequent World Robofest championships and other international competitions for next year.

The President, Prof. Sam Afrane signed the MOU on behalf of CSUC, whilst Dr Yaw Okraku-Yirenkyi signed on behalf of GRAF as the Country Director.