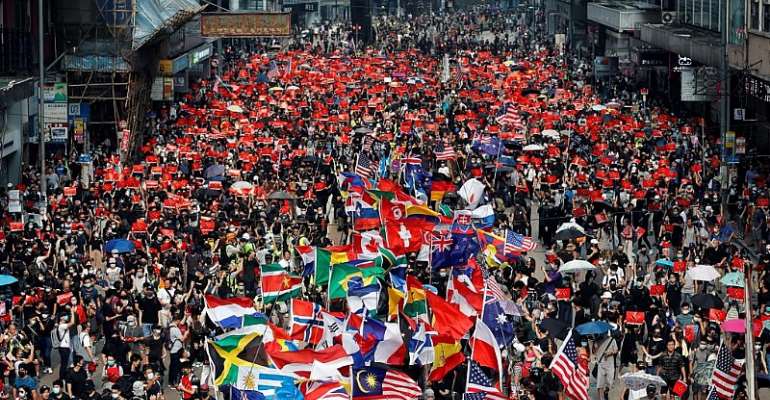 Hong Kong authorities have announced a ban on pro-democracy protests on Tuesday, citing security concerns. This comes as China gears up to celebrate the 70th anniversary of its communist foundation.

The police have already issued a warning that they are expecting pro-democracy protests on Tuesday to be "very, very dangerous.”

“The depth and breadth of their violence and plans show that they are increasingly resorting to terrorism," he added.

Democracy activists have dubbed Tuesday a "Day of Grief", and there appears to be little sign of the four-month long protests abating in Hong Kong.

The city witnessed some of its fiercest political violence in weeks on Sunday when riot police used tear gas, rubber bullets and water cannons at multiple locations for hours during running battles with protesters who were seen hurling rocks and petrol bombs.

Some branches of the Starbucks coffee chain were vandalized with graffiti, after a franchise owner spoke out against the protesters, under pressure from Beijing.

Businesses that choose to stay silent however, risk financial punishment on the mainland, which represents a far more lucrative market.

The movement is part of a four month long protest which has seen millions take to the streets, forming the biggest security challenge to China's rule since the city's handover from Britain in 1997.

Protests are banned
On Monday, authorities announced that they were upholding a ban on a planned National Day democracy march, citing security concerns.

The Civil Human Rights Front (CHRF), a group that advocates non-violence and was behind a series of huge peaceful rallies earlier in the summer, hit out at the decision, saying it was the fourth time their march proposals have been rejected.

With legal rallies banned, online forums used by the largely leaderless movement have instead called for wildcat protests across the city in an effort to stretch police resources.

Four months of anger
The unrest was triggered by an extradition bill to the mainland that has now been shelved.

The movement has since morphed into a call for free elections and less intervention from Beijing.

Their demands for an independent inquiry into alleged police abuses, an amnesty for those arrested, and the right to elect their leaders, have so far dismissed by China.

Hong Kong leader Carrie Lam flew to Beijing on Monday to take part in the National Day celebrations which includes a number of festivities including a massive military parade.