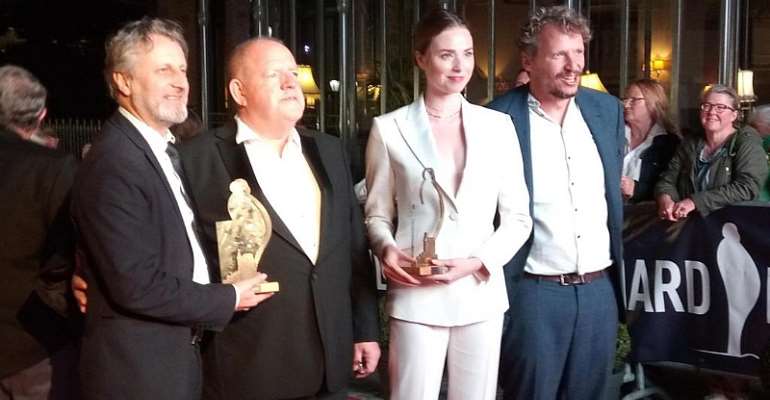 The UK-German film directed by Marcus Rosenmuller is about a German prisoner of war in England at the end of World War who becomes a professional football player. It won the big prize in Dinard from the professional jury. It also won the hearts of the audience to scoop the 2019 Hitchcock Audience Award.

Rosenmuller said, “To win an audience award is only possible if the actors fall into the hearts of the audience.”

They won the hearts of the audience with an adaptation of the story of Bert Trautmann. From German PoW, he became a leading footballer for Manchester City football club. He married an English woman, Margaret Friar, which didn't win them many friends at the time.

However, times have changed and jubilant at winning grace in the eyes of the audience, the director bounced on stage saying, “what an honour, I'm from Germany, making a co-production with the UK, and we are all here in France.”

Perhaps that's why the festival changed its name a few years ago to be more inclusive, dropping the word “British” from its title.

Fair and share
Sandrine Bonnaire, the president of the 30th Dinard Film Festival Jury told RFI on Friday that the jury were largely united in their choice, but « two films had really struck the jury equally” so she might be called upon to use her deciding vote. “We'll see” she said.

In the end, they found a clear winner in The Keeper, but gave a best screenplay award to Vs. directed by Ed Lilly and co-writtne by Lilly and Dan Hayes.

Bonnaire and her jury took an unusual step and decided to make a unique acknowledgement. “Some films we liked more than others, that's just how it is, however we found that the six films all had one thing in common – wonderful actors and actresses. So we decided to give a 'special mention' to all of them.”

They also singled out In Our Skin, a four-minute film in praise of the female body from Rosa Beiroa.

However, Meadows said that all four jury members, himself, Farah Abushwesha, Phénix Brossard and Diane Gabrysiak “were all genuinely blown away by the quality of the all the films.”

Instead of a long and flowery speech, he regaled the crowd with his story of a chance meeting with Alfred Hitchcock at his film school in 1964, and how “short and fat” Hitchcock, in his own special way swiftly poured cold water on awed student Leigh's attempt to make conversation.

Leigh's films have been delighting and moving French audiences for decades (winner of the Cannes Film Festival's best screenplay award in 1993 for Naked, Golden Palm with Secrets and Lies in 1996, Best Actor for Timothy Spall in his Mr Turner in 2016, five films in all in competition). His 2018 period film Peterloo screened in the Previews section at this year's Dinard Festival.

Cinephile as France is, and as interested as the authorities are in cinema too, Film Festival fan Mayor Jean-Claude Mahé said the longevity of the event depends on political will. “We are entering an electoral period [municipal elections due in March 2020]. It would be useful for all the local elected officals, councillors, to have an intelligent think about the place of cinema here,” he suggested.