Egypt pushes for end to US 'terror' blacklisting of Sudan 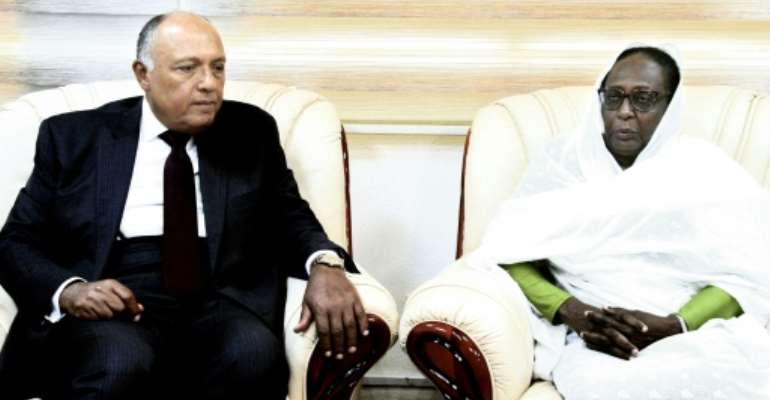 Shoukry is in Khartoum for a one-day visit to hold talks with top officials in what Cairo hailed as a "new start" in relations between the neighbours as Sudan transitions towards civilian rule.

Egypt had been a steadfast ally of Sudanese military generals who seized power after the army ousted long-time leader Omar al-Bashir in April following months of nationwide protests against his autocratic rule.

But previously ties between the neighbours had often been strained over the years due to trade and border disputes, although efforts have been taken by both to address the concerns.

He also met General Abdel Fattah al-Burhan, the head of a joint civilian-military sovereign council that is overseeing Sudan's transition.

Shoukry said that during his talks, which aimed to "boost relations between the two countries", he offered Cairo's backing for dropping Sudan from Washington's list of state sponsors of terrorism.

"Egypt is supporting Sudan to be removed from the terrorism list," he told reporters.

"We have also raised this issue with the United States of America ... we will continue pushing for it in coordination with the Sudanese authorities."

Decades of US blacklisting along with a trade embargo imposed on Sudan in 1997 has kept overseas investors away from the country, in turn isolating it from the global economy.

Sudan's worsening economic situation was the key trigger for nationwide protests that finally led to the ouster of Bashir.

Washington lifted the sanctions in October 2017, but still kept Sudan in the terrorism list along with North Korea, Iran and Syria.

Al-Qaeda founder Osama bin Laden used to reside in Sudan between 1992 to 1996.

Washington and Khartoum have, however, engaged in negotiations to remove Sudan from the terrorism blacklist since the sanctions were lifted.

The Egyptian foreign ministry earlier said that Shoukry's visit "shows Egypt's support for Sudan and to its people in achieving their demands".

Relations between Cairo and Khartoum had deteriorated in early 2017, when Bashir accused Egypt of supporting rebels in conflict zones, including Darfur in western Sudan.

But for years the main bone of contention between the two countries has been Egypt's control of the Halayeb triangle, which lies in a mineral-rich border region.

During Bashir's rule, Sudan regularly protested at Egypt's administration of Halayeb and the Shalatin border region near the Red Sea, saying they are part of its sovereign territory since shortly after independence in 1956.

Ties between the neighbours improved after Sudan lifted the ban on Egyptian products in 2018 following talks in Khartoum between Bashir and his Egyptian counterpart Abdel Fattah al-Sisi.

Sisi and other Egyptian officials had regularly called for stability in Sudan after protests erupted against Bashir in December.