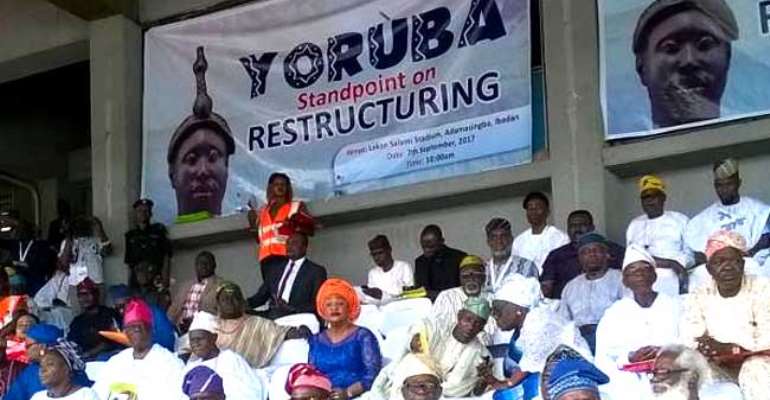 In the last number of days, I have been getting calls from within the Yoruba Nation on some recent publications in the Nigerian mainstream media under my name which in journalistic parlance is called "by-line." The calls have also caused me to make some calls. The publications are about Professor Banji Akintoye.

The concerns of those who have been calling me, it seemed, was that there is currently a crisis of confidence and trust in Yoruba land and that those publications have been fueling such. The crisis of confidence and trust, it appeared, stemmed from the reported choice of Professor Banji Akintoye as the new leader of Yoruba Nation by a cross section of self-determination groups numbering over 50. The number of the groups has been variegated.

I must state unequivocally, that while I did not in anyway cause the recent publications or republications of the article in question, I have nothing against it being republished because it was and still is meant for public consumption. That some have found it relevant for their own agenda, and as such republishing it, have no direct or indirect functional relationship with Remi Oyeyemi.

Secondly, some of those who called or sent messages to me were suggesting that it is being insinuated in some circles that I am behind these recent publications of that old piece, as a part of a grand plan to divide the Yoruba leaders. This is sheer blackmail. It is a complete, total and gross falsehood.

I wrote the piece in question and published it on May 22, 2019, under the title of STEPHEN ADEBANJI AKINTOYE: A TEACHER OF TEACHERS. That was clearly three months ahead of the event in Ibadan, that took place on August 21, 2019. The article was not a political commentary. It had and still has nothing to do with politics. It has nothing to do with any political leadership aspiration of any person. The contents themselves, speak volume to the validity of this point.

From Pa Reuben Fasoranti to Pa Ayo Adebanjo to Pa Banji Akintoye, they are all my heroes. And I believe they are heroes of the Yoruba Nation. They built the Yoruba Nation as we knew it and gave us the pride with which we saunter around and seek to create a new future for ourselves and the coming generations. They have made a lot of sacrifices. They have paid their dues.

So, if there is any scheme by any group for any reason, I am not aware of it. The republication of that my article in the mainstream media in the last several days was not done by me. If it suits the agenda of any group, I am not in position to control that. But I am not against the republishing of the article that is meant for public consumption in the first place. I am in my Òsómàálo farm trying to eke out a living.

I had written that article, which was unsolicited, not even by Prof. Akintoye himself, for every reason that had and still has nothing to do with politics. When he called me after the publication in May this year, he had expressed surprise that I did not let him know about it upfront. My response was that I did not want to read my impression of him at his grave side.

I have not spoken to Pa Ayo Adebanjo and Pa Banji Akintoye on this matter, both of whom I have written about positively unprompted. They have paid their dues and anyone of them is eminently qualified to lead the Yoruba Nation. Deliberately too, I did not call Pa Reuben Fasoranti. He remains the leader of Afenifere without any question. And I don't think anyone is agonizing over that. I am very much aware that Pa Fasoranti and Pa Akintoye knew and still know each other more than any of us does in my generation or those ones behind us. It is wrong for some who have their hidden agenda to seek to fuel any crisis between Pa Fasoranti, Pa Adebanjo and Pa Akintoye.

Pa Fasoranti, Pa Adebanjo and Pa Akintoye are still good friends and are still talking as far as I am aware. I am sure that the survival of the Yoruba Nation is more importamt to them than any position resulting from the adventures of our concerned youths in the self-determination groups. They know more than any of us that "Tí Ògiri ò bá la enu, Alámgbá kò lè r'áyè wo bè."

Eventually, I would still reach out to these leaders at a more auspicious time. But my appeal remains the same: they should not allow people to come in between them. They should not go the route of demonizing any of each other. The enemies are inside the house, prancing around to devour us. That should be our focus and concern.

May Elédùmarè bless the Yorùbá Nation.

May HE continues to guide, guard and glitter the path of our Nation.

May the Orígun mérìndínlógún of Odua land bless us all

The author has 145 publications published on Modern Ghana.