Students return to school in France under shadow of strike action 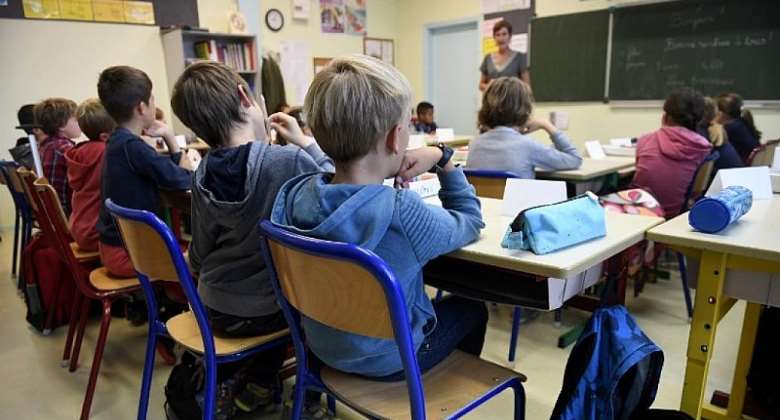 The French education minister Jean-Michel Blanquer has set the tone of the new school year promising one of “maturity and success” insisting that the well-being of teachers will be a priority. But some staff are planning to strike again over recent reforms and changes.

La rentrée, or 'back to school' is a key moment on the French calendar for families and teachers alike.The end of summer spells bags full of brand new exercise books, pencils and a dose of nervousness mixed with excitement.

However, this year many changes pushed through by President Emmanuel Macron's government will be put in place, in some cases for the first time, leaving the teachers and their unions sceptical and in some cases, apprehensive.

France has some 12 million students from kindergarten to final year with 871 000 teachers, most of whom went back to school on Thursday or Friday last week to prepare their classrooms and lessons.

Tougher security measures
In a surprise announcement at his press conference last Tuesday, the Education Minister Jean-Michel Blanquer outlined the government's plans to deal with violence in schools.

Teachers have been calling for this for months, prompted by the case of a teacher who was threatened by a student holding a fake gun in Créteil, south east of Paris last year.

An outpouring of sympathy for the teacher in question turned to anger as teachers started the hashtag #PasDeVague (don't make waves) to denounce the absence of reaction or support from the National Education board on the subject of violence against staff.

Many teachers responded to the hashtag on Twitter, describing their own experiences at the hands of physically or verbally violent students.

To tackle this problem, the education ministry said in the first instance, a police presence would be increased around schools.

Secondly, a 'violence mediator' will be nominated in each administrative area of France, who has the power to place aggressive students in a special remedial class after two warnings.

According to Blanquer, there are around 1,500 students with a record of severe violence at school.

In France, at the moment, there are 298 'violence mediators' who can accompany up to 12 students for a period of six months.

"We're setting up a protocol to put some onus of responsibility onto families, a school inspector will meet with the families of the individual in question, to see how they can help the student get back on track and if they don't start behaving normally, the student will automatically go to a special remedial class,” says Blanquer.

Some unions expressed their concern that the minister's approach was a little heavy handed and that a lot of work will have to be done with families in order for this system to work.

Francette Popineau, from the SNUipp-FSU union which supports primary education, told Franceinfo public radio that she regrets that Blanquer's new measures are "repressive rather than educational or preventive."

Back to bac
One issue that rankles staff the most it seems is the changes to the 'Bac' (short for baccalareat), or final year exams, which will come into effect in 2021.

Earlier this year, thousands poured into the streets to manifest their anger over such major changes.

S for science, L for literature and ES for Economy and Social Sciences. These traditional branches of study will be replaced by more specialized choices, in other words, students can choose their subjects “à la carte”, effectively flattening the system.

This is part of the Blanquer Bill which aims to modernise the national school system to make education less elitist.

Several teachers interviewed by France Televisions said the changes would mean whole course outlines for upper high school would have to be modified to adapt to this new directive.

On top of that, they feel that political decisions are invading their domaine of expertise and the approach of the minister is overly authoritarian.

For some teachers, like English teacher and union member Sylvie Hourcade, choosing subjects based on what students 'like' is very deceptive and unrealistic.

The new format 'Bac' will be based on four written exams and one oral exam.(See david roe's article feb article on school / strikes)

All talk, no action
Blanquer's suggestion to hold follow up committees later this month to help schools and teachers deal with the reforms has been welcomed, but for some unions, it will be difficult to put the new measures in place in time for the first exams which will take place in January.

Professor Bierce, a member of the SNES-FSIU union told RFI that it's a good that the government is trying to reach out to teachers but that this is a well-worn technique employed by Blanquer over the past three years which has yet to yield any results.

“Each time we wanted to represent our point of view and signal problems ahead of the new school year, seeing that their reforms were conducted in a forceful way, we have never been heard. It costs nothing to say that we're open to dialogue, but we're still waiting for this to translate into action,” he says.

To strike or not to strike
As for trade unions, not all of them have organized strikes yet. Some are waiting to see how the reforms pan out, others have given their notices to prepare for strikes and demonstrations.

The Snalc (National Union for High Schools), have warned their members to prepare for strikes throughout the month of September because they already know the situation will be difficult.

Apart from the reform itself, there's always the question of salaries and bonuses which have been promised but not yet delivered.

Other changes
Children are now obliged to start school from age 3 as opposed to 6 years.

This is not a huge change in itself as many children already do this, however, it means considerable changes to the ways schools are funded, and the public sector worries if funding will be pulled away from them and give to the private sector.

The 'Blanquer Law Bill' also promises to better include students with handicaps into the normal school cursus, affecting over 24,000 students this year.

A hotline service for families to get advice has been set up.

Teachers dealing with handicapped students will also have more help either through extra training or an online information centre.

Prime Minister Edouard Philippe says 300 000 children across France will benefit from class sizes being halved, for children in CP and CE1, (that's ages 5-7).

Finally, the French and European flag is to be displayed in all classrooms in every school and students will have to learn the words of the national anthem, La Marseillaise.