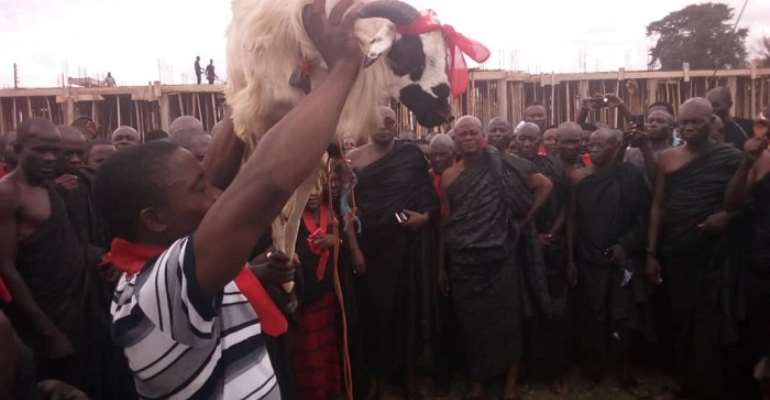 Chiefs of Atebubu in the Bono East Region have invoked curses on Sanja Nanja, former NDC MP for Atebubu Amanten, calling on their 'gods' to strike him if he dares to contest the seat again.

The Atebubu Tradtional Council led by Nsumakwanhene, Nana Kofi Amoakohene, yesterday performed a ritual by slaughtering a white ram to the gods for Sanja Nanja who has already filed to contest the seat once again.

Whilst in office as MP, the traditional authority had a long running feud after they claimed the MP insulted them, particularly the queen mother of the area, Afua Donyina II, and that resulted in the MP losing his seat in 2016.

The bad blood between them does not appear to go away as the chief slaughtered a sheep yesterday to show the MP that they mean business.

Nana Asumakwanhene slaughtering the ram said the former MP has since refused to apologise to the queen mother and to pacify the gods.”

“We are slaughtering this ram as way of sacrifice to pacify you (the gods) for the insults and also ban Sanja Nanja from neither contesting nor campaigning on our land for any reason,” he pronounced.

The decision to ban Sanja Nanja, the chief said, has nothing to do with the NDC as a party but the nominee who has filed and been vetted to contest in the primaries for the constituency.

Sanja Nanja a former MP and District chief Executive for Atebubu Amanteng has incurred the wrath of the traditional council since 2016 when he insulted the personality of the queen mother of area on radio calling her a drunk.

He was asked to apologise and pacify the gods for his 'uncouth' and 'uncharacteristic' behaviour of an MP but has refused.

Another ritual also known as Kodawane was invoked to prevent Sanja Nanja from getting into contact with any chief from the area or send any emissary through any chief.

They have said that any chief who entertains Sanja Nanja will also be destooled.