RE: Free SHS Will Not Keep NPP In Power Forever 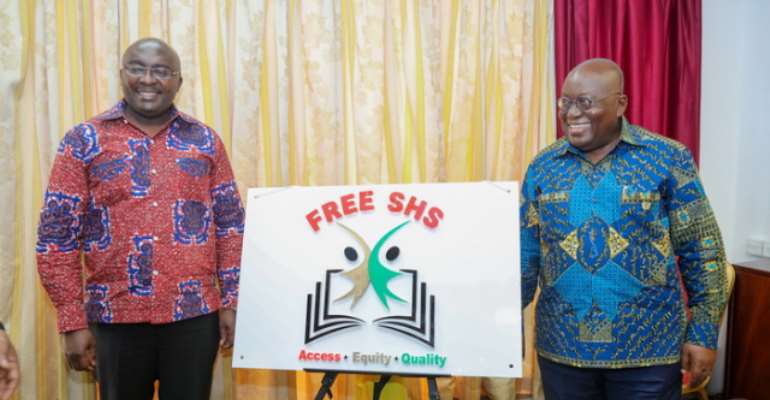 It has been widely reported that following the president, Nana Akufo-Addo's assertive response to the cynical NDC about FSHS, Mrs Bawa Moghtari, the spokesperson for the former president, HE John Mahama, has taken a swipe at the president and said "FSHS will not keep you in power forever".

To keep our response to her and indeed the entire NDC in proper perspective, we've to look at the president's reaction to the NDC in the context of NDC's attitude towards FSHS prior to and after the 2016 elections.

It is on record that the NDC sponsored over 30 adverts against the policy. They worked tirelessly in cynicism to prove to the Ghanaian electorates how impractical and impossible it is for anyone to implement FSHS in a couple of decades to come. Indeed the late Ambassador Lee Ocran, a former minister for education under NDC, mocked the policy and said emphatically that; it's impossible for the next 20 years. Hon Fiifi Kwetey, Okudzeto Ablakwa, Felix Kwakye Ofusu and Dr Omane Boamah were unequivocal in articulating their cynical views about FSHS.

President Mahama himself during the 2016 electioneering campaign, on several platforms, had called the campaign promise of then candidate Akufo-Addo, a lie and a deceit. He virtually asked Ghanaians not to buy into the policy as according to him and his cynical NDC, it wasn't a feasible policy.

After they saw the massive clamour for the policy by Ghanaians, they quickly threw in a stale counter to FSHS by alluding to constitutional provisions that make progressive free education, an imperative. They therefore claimed they were trying to build all the needed infrastructure so that they will also implement FSHS. So they promised to build 200 high schools and 10 colleges of education. Now we have come to know not a single college of education was built and only about 26 of the SHS which were sponsored by the World Bank, was completed - this is nothing more than a monumental failure. In their typical deceitful fashion, and as one of their stale propagandas against FSHS, they claimed to be implementing FSHS progressively a few months before 2016 elections, by absorbing Gh¢35 out of the over Gh¢300 fees of high school students.

As we know, Ghanaians rejected the corruption-ridden NDC government massively in 2016 by overwhelmingly endorsing Nana Akufo-Addo and the NPP. In the first year of the NPP's administration, the ambitious FSHS was implemented. Leading figures of the opposition NDC who to date are not happy about the policy, shouted purposelessly to discredit the implementation. For example, they raised questions about sustainability which has fallen flat because after almost 3 years of implementation, the policy is still running effectively.

When the government introduced the innovative double-track policy as a measure to contain the over 90,000 additional enrollments as a result of FSHS, they made ugly noises about it. An intellectual analysis of the double-track system would have revealed to the cynical NDC that, contact hours which is the most important consideration in educational planning, has increased by about 10% under the double-track system.

On several occasions, NDC has called for cancellation of the FSHS in its current form. It begs the question - how can someone completely opposed to a policy, now purport to be interested in its effective implementation? NDC has told us they would rather prefer a targeted FSHS than the wholesale one being implemented by the NPP. The signs on the walls are clear that: NDC if given one day in office, will abrogate the policy.

The conviction of the president is that - the most equitable way to distribute the natural resources of Ghana, particularly oil, is to invest it into the future of this country i.e, the young children some of whom would never have had access to SHS education but for FSHS. Whereas the NDC opted to invest the country's resources in corruption, NPP has opted to secure the future of this country. By this policy, access to SHS has increased by 48% - an unprecedented increment in history of our country. The burden on parents have been removed by this policy. In the next 10 years to come, the fruits of FSHS would clearly be seen as the beneficiaries today, would constitute the human resource base for the country tomorrow.

Mrs Joyce Bawa Moghtari's response is a confirmation about the long-held view that while NDC thinks about the next election, the NPP thinks about the next generation. FSHS is a policy to secure Ghana's future and not to necessarily win the next election. Having said that, we implore Ghanaians not to give NDC the opportunity to cancel the FSHS come 2020 because they've clearly demonstrated beyond reasonable doubt, their opposition to the policy.