By Oli A. Rahman
Commentary 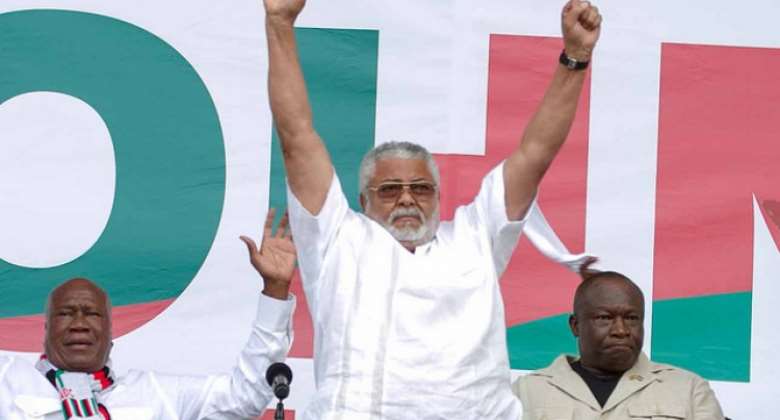 In one of his episodes of “With All Due Respect”, Kevin Taylor touches on the subject of Jeremiah John Rawlings. In plain language, he calls the former President, former Chairman of the PNDC, and former Chairman of the AFRC a “Modern Day Judas”. This, in reference to a man who enjoyed the longest hold on power in Ghana’s post-colonial history is heady stuff indeed.

The National Democratic Congress (NDC) was the vehicle put together for him to contest the 1992 elections which ushered in the 4th Republic. Other political parties, notably EGLE and NCP also threw in their lot behind him and he went on to become the first President of this Republic and though disputed with a “Stolen Verdict” by the NPP, he got through his first term of four years fairly easily and got a second term in 1996. The Constitution “forced” him out in 2000 and therefore in total, adding his PNDC years, he had been at the helm for almost 20 years. The Founding Father of Ghana, Osagyefo Dr. Kwame Nkrumah was on for 9 years.

The NDC did not let him go empty-handed when he left office and created a title and role of “Founder” for him, which meant, though honorary, he still had a central role to play in the affairs of the party and could in theory “interfere” at will.

Not long after this sweetheart deal, the drip, drip of bad blood set in and Founder and Party started drifting apart culminating in 2016 when Founder would not play a frontline role in the Party’s campaign for that year’s General Elections. His wife Konadu had stuck the dagger earlier by breaking away to found her own political party whose main message, was for Ghanaians not to vote for the NDC.

The elections turned out in favour of the NPP and immediately upon inauguration, the couple latched themselves onto Nana Akufo-Addo and his party. To all intents and purposes, they had become more loyal to the NPP than the NDC and could more or less be regarded as card carrying members of the NPP. All their words and actions after, were tailored to do the NDC in while promoting the NPP.

These clear acts of disloyalty should in normal circumstances have led to the dismissal of Rawlings from the NDC as his wife, (at one time, the leader of the women’s wing of the party with her December 31st Women’s Movement) had already quit in a fit of anger over a humiliating challenge to Professor Atta Mills’ leadership.

As another General Election approaches next year, the NDC seems frozen, petrified of taking the path Mr. Taylor is advocating, even though almost all are thinking along the same line. A few brave members have voiced out their frustrations here and there in the media, but have gone no further…

The Founder hounded his own hand-picked successor, the late Professor Mills and never saw anything good in Mills’ successor either, John Dramani Mahama.

He made and still makes much noise about corruption but the NPP he is sucking up to is in no way better than the NDC in any area of governance, certainly not on corruption!

His constant snarling and barking at everyone, and especially the Party that has so ennobled and nourished him – when a huge portion of his own record has gone unchallenged sounds like “me thinks he doth protest too much”. That’s what Kevin Taylor is driving at. But who will challenge him? Before, it would have been the NPP, but now they have him on their side and will milk the relationship ad nauseam, ad infinitum, to cause as much damage as possible to the NDC.

It is also not possible, indeed, not feasible, for any party member to denounce Rawlings at this time, the way Nikita Khruschev did to Stalin at the 20th Congress of the Communist Party on February 25, 1956, long after the death of the latter. The denunciation which was in a major speech entitled most significantly and tellingly, “Personality Cult and its Consequences” brought down the former dictator from grace to grass even in death…To attempt that on Rawlings is an entirely different kettle of fish: Khruschev got away with it because Stalin had died but Rawlings is very much alive!

In fairness, the NDC has strained muscle, bone and sinew to accommodate him over the years. Professor Mills, his hand-picked successor became the butt of critics’ jokes when he declared that he would consult Rawlings 24/7 and for John Mahama, as Minister of Communications, to the consternation of his numerous admirers would always strain to clean up after one or other of Rawlings’ goofs and gaffes.

Academics, intellectuals and professionals like Dr. Obed Asamoah, Dr. Kwesi Botchwey, Tsatsu Tsikata, the late Ato Austin, the late P.V. Obeng, Huudu Yahya, Ibrahim Adam, Nana Ato Dadzie, Kofi Totobi Quakye and even the redoubtable Kojo T, and many others, were there at his beck and call. He did not always treat them with respect, but they still went along with him. He owes so much to such individuals and the NDC than he will care to admit. The very fact that he is still “booming” is because of the NDC which has always been a redoubt for him.

What he has done and continues to do for them, even as he gradually approaches his 80th year, is nothing but contempt, when he should be showing loyalty, appreciation, solidarity and gratitude for the individuals and Party that have stood behind him all these years.

His “performance” at the party congress late last year summed up the contempt: Whereas President Mahama had a rousing and spirit-lifting message for delegates, Rawlings mumbled cryptic two or three lines about examining your inner self or some such thing after which he stomped out never even bothering to return and vote…

But what about the NDC, now facing this existential threat due to its relationship with a destructive Founder? Can, should, would the party help itself? Looked at dispassionately, instead of the NDC taking umbrage, Kevin Taylor’s take should be seen as a lifeline thrown to the Party.

A lifeline, the Party can, should and would have to grab in good time. Could this be the time?

…Or that mythical bird of destiny, “Santrofi Anoma” is haunting the Party into perpetual not-knowing-what-to-do with the Founder even as he continues to cause the Party much grief…

…Or as some would suggest, he should be left for time to bleach him out into insignificance and irrelevance for a Nikita Khruschev to do the rest…

Whatever line the Party takes, it would have to confront this reality – Election 2020 is less than one and half years away. Rawlings is not a hateful figure in the NDC and indeed, to many people, but then many in the NDC, if they had the gift of verse, would compose a rhyming couplet ending with distraction and destruction!