NPP and the new Regions: The Abandoned Projects

By Oli A. Rahman
Feature Article 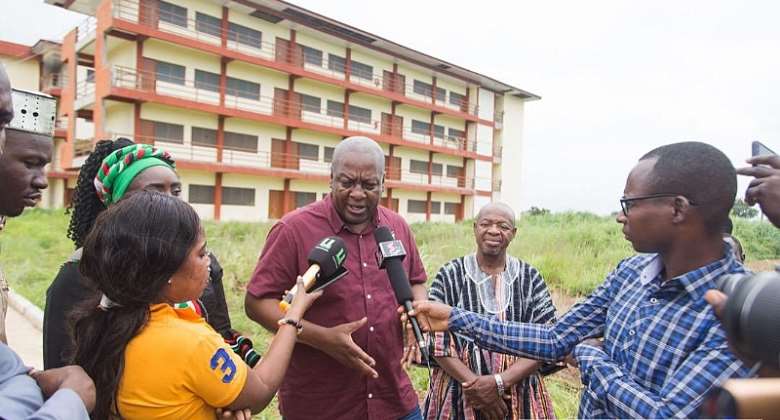 Former President Mahama talking to the media in front of one of the numerous abandoned projects in the new regions.

Kayiti Wura John Dramani Mahama has been very busy these past weeks doing outreach tours of some of the six regions recently created. He completed Savannah, North East and Oti this week where media reports have shown him being warmly received in all the places visited.

He met with traditional rulers and their people and also inaugurated regional officers and offices of the NDC. He naturally, made pitches towards 2020 through mini rallies in communities.

“NDC/John Mahama and the new Regions” would have been more of an accurate heading, had it not been for a rather curious event that took place at Damongo, capital of the Savannah Region, on the first leg of the tour…

Whether it was a pre-emptive move or desperate attempt to scuttle or even take the sheen off the outreach, the NPP Chairman of the Region organized a press conference whose main theme was a challenge to the right of the former President to visit the Region – the region of his ancestry.

According to the NPP Chairman, the former President was not the one who created the region and so should not visit it to tell the people anything. This is no laughing matter! He was damn serious! It was a most incomprehensible turn of affairs as the Chairman boasted that Nana Akufo-Addo created his region and the former president should not visit and claim credit! He spoke about what he said were the various development projects initiated by the NPP strewn all over the region.

Tellingly, he could not give any specific example of such projects nor make reference to the numerous ones initiated by the Mahama Administration and abandoned when there was a change in government after the 2016 Elections.

To underscore this point, President Mahama visited many such decaying projects, including community based secondary schools, example pictured above in a town called Mpaha, which had been abandoned, though ready for occupation. That particular school was put up with funds from the World Bank (WB) and Government of Ghana (GoG). Inspecting abandoned projects, not just schools but roads, hospitals and others was thus a major feature of the outreach tours…

The new regions, like the old ones, are administrative units of the State of Ghana enshrined in the Constitution and belong to no individual, political party, or ethnic group. For the NPP to claim them for Nana Addo Dankwa Akufo-Addo is not only provocative but also undermines the Constitution.

The press conference is yet another example of the confrontational intolerant politics that has crept into the polity these past couple of years – a dangerous development that threatens the cohesion of the country. These are areas which politicians and ordinary citizens must not tread even as a joke; excessive partisanship and the inordinate craving to score cheap political points, as exhibited by the NPP Savannah Region Chairman, can only lead to conflict.

Both NDC and NPP promised in their manifestos to create new regions – the NDC, 5 and the NPP, 1. The NPP beefed up its 1, with the NDC’s 5 and arrived at 6 – both parties promising implementation after Election 2016. Implementation cannot therefore be considered as a spoil to be claimed and exploited as a personal property, to the extent that a former President’s visit would be the subject of a press conference threatening denial of access…

Was it therefore simply as a political gimmick that the NPP rushed the implementation through in order to milk it to the party’s advantage in electoral terms? It wouldn’t have mattered if it wasn’t so cynical and crude. It is quite clear that development was the camouflage for political gimmickry and opportunism, a ruse which may yet backfire on the NPP: New regions. Same old problems! The indigenes and the traditional rulers constituting these new regions, from one constituency to the other, over and over, asked for the return of the one who started the abandoned projects to complete them and initiate new ones.

The new regions mirror the old ones they were hived from; all have one need: Development. Aspects of this developmental need are the projects that were initiated by the Mahama Administration and abandoned from 2017 on.

That should be the concern of the NPP Regional Chairman of the Savannah Region (and others with a similar outlook) and not the puerile argument of ownership of the new regions. The people of the regions own their regions and with justification, expect their fair share of national resources for development and not cavalier “politricks”…