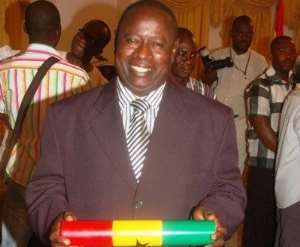 Palpable trepidation clothed in red and black colours has spellbound worried members of the National Democratic Congress (NDC) in the Zebilla Constituency in the upper East region. And that trepidation is obviously, another peril to the chances of the party ahead of the 2020 parliamentary elections, given the narcissistic ambition of a particular politician bent on not only palming-off his authority like a colossus on the people but also controlling the entire NDC political structures of the constituency.

His long nursed intention has always been to pouch the NDC in the constituency for his command and control. In fact, the aim is to make the NDC in Zebilla Constituency his empire and rule it until death do them apart. The move began in 1992 when he strolled into the political space of the constituency as one of the scarce lawyers within the party in the region. The party and the entire people of the constituency submitted themselves to him, hoping to benefit from his leadership as a lawyer turned politician. They thought he was like any other leader who would know when his or her relevance was obsolete and bow out honourably. But no! He is not one of such leaders who know when to call it a day.

Today, his fangs are clawing deeper than imagined, casting a blistering hex with unfathomable implications for the party and its membership in the constituency, that was proudly cherished and referred to as ‘NDC’s soul in the whole of Upper East region. As humans, our lives are like pages of a book. We are read by many people and when they are done reading all our pages and re-reading same, we become less important to them. We become only important for reference, that is if the content of our pages they have read are deemed to be of relevance for such a purpose. This particular politician, we have read him cover to cover. Even children who were born around the year 2000 have done same yet he says we are now starting with him. He is Hon Cletus Apul Avoka.

For NDC in Zebilla Constituency, it’s been like a fireball of bad luck all through, triggered by Hon Cletus Aul Avoka’s one-man leadership show. Since the inception of democratic rule, the constituency has been bedeviled by his “I am the only person qualified” syndrome. And this has been the reason for the one step forward, two steps backward of the constituency. It leaves a lot to be imagined.

In 1996, Hon Cletus Apul Avoka rode to power on the mantra of “Tiig Maalug”, that is, developing the constituency. We sung all the good songs with him to victory. It was an emphatic triumph. The people simply endorsed him and tied their destiny to the NDC as a political party. When he was through with his first term in 2000, the constituency was worse; it took a different road, totally at variance with his lustrous promises. Instead of developing the area, he devoted his time and resources to form a cabal that became the Cletus Apul Avoka Party (CAAP) with its slogan as ‘There Is Nobody To Contest’ and boldly supported by ‘this is my last term’.

Led by CAAP, he offered himself one more time to lead the party into the 2000 parliamentary elections. With another set of lustrous promises thrown at us again, we sung the good songs again and cheered him into another massive endorsement. Then CAAP became more powerful than the party and always had a field day. Every progressive tendency was frowned at and vehemently resisted. And so at the last count in 2004, he and his CAAP left a deep and painful smudge on the NDC’s political history in the constituency. The first time ever, that the party had its nose badly bruised by the People’s National Congress (PNC), led by Hon John Ndebugri Akparibo. The one-man leadership show was too much. It had choked the people for far too long and their hope took a flight and they said in unionism ‘enough is enough’.

Then came 2008, everybody thought Hon Avoka and his deadly CAAP had let loose the party in the constituency for a fresh blood to takeover, but they resurfaced again with same slogan ‘There Is Nobody To Contest’ and boldly supported by ‘this is my last term’. But this time they appeared like a harmless lamb that had nursed serious wounds from a devouring lion and would rush to its abode upon hearing the barking of dogs. With the benefit of retrospection every constituent expected a better outing by the former MP who was returning after nursing his bruised nose.

So we rallied around him one-more-time. We sung the good songs and drummed to the people his lustrous promises. “This is his last term, this is his last term” was our leading campaign message. It was another landslide victory for him and the party. And from the various ministerial positions he had held over the years, he was elevated to become the Majority Leader in Parliament. So in the 2012 elections, so opinion leaders in the constituency said being the majority was a justification to push him back to do another last term. It was a tough battle as many people thought otherwise. Together, we fought and he was returned to parliament with a pledge of never to go again.

But outlandishly and startlingly, in the 2015 parliamentary primaries when everybody knew that Hon Avoka had retired honourably and admirably, he and his deadly CAAP jumped all obstacles to foist themselves once again on the people of the constituency. They broke the promises and the pact they had with the people before the 2016 elections. The ‘this is my last term’ slogan was seen to rather mean ‘I must die on the seat’. Some of us rose against it and we were called out as enemies of the party. It was then we realised that clean water emptied into a polluted bottle has no business with purity.

The fate of the party in the constituency became like the heart-wrenching story written by Marianne Mash about a neglected girl betrayed and exploited by the neighbour she trusted. We trusted the wrong person. We trusted him but he gave us a leprous finger handshake. The additional eight years of power handed to him could not quench his desire of forever hanging onto the seat of Zebilla constituency. He went into the primaries, manoeuvred his way into victory of leading the party into the 2016 elections but loss woefully in the general elections.

The 2016 election has come and gone. We have nursed our painful wounds as a party and moving onto 2020 general elections. And there come Hon Avoka and his deadly CAAP again with the same old moves bent on building his political dynasty instead of putting the interest of the party first. I was not kick in the teeth to hear of him joining the queue in picking the parliamentary nominations forms and filling same by himself over the weekend to contest the upcoming primaries to lead the party again into the 2020 general elections. I was not the least surprise.

Hon Avoka and his CAAP want to lead the party again badly. And they want to do this with same old, same old slogan ‘There Is Nobody To Contest’ and boldly supported by ‘my last term,’ a development that many well-meaning constituents see as another outright insult on the entire NDC in the constituency. Should this development go unchecked, the NDC winning back the seat in the 2020 general elections would be disparage, all to satisfy the power-hungry Hon Avoka and his CAAP.

This doom signal should heave at the heart-strings of the entire members of the NDC in the constituency. It should jolt them to wake up from their collective deep-sleep, a sleep so deep that their constituency remains under the control of one and only one politician. They shouldn’t be bothered about the outcome of the NDC primaries; he must be stopped democratically from pursuing his selfish democratic right of contesting even in the primaries.

As I said in 2015, none of his contenders is likely to uproot him in the upcoming primaries. He will still manage the numbers to cling onto a defeating victory. My sacred information gathered, revealed that Hon Avoka is ready to muscle his way to become the leader of the party in the constituency using whatever means. This continuous desperate action has clearly differentiated who a good leader is and who a self-centred and power seeking leader is. His is politics of monotony. His is a politics of greedy and nothing more.

Hon Avoka and his CAAP are up again. And as I predicted in 2015 that the worse could happen to the party in the constituency during the 2016 general elections if they were allowed to continue putting the party under their armpit, I am telling them again that if they manage their way into seizing the soul of the party this time again, a repeat of 2016 awaits them. I know as I was simply overlooked yesterday, I will be overlooked today too. But what is sure, is that as Hon Avoka and his CAAP led NDC kissed the dust yesterday, they will be beaten badly once again in 2020. Mind you, I am not a prophet of doom. No! Never!

Fair as the thinking may appears that, there is a democratic internal primaries to contest and that if the people do like him, they will show him the exit, I see this primaries in the constituency as a mere exercise designed to satisfy the interest of certain individuals, as the only way of hanging on to the corridors of power. Like as in every good movie that has two ends, this primaries in the Zebilla constituency seems to be heading towards a tragic end. What will happen at the end remains a matter of prophetic guess work as many party leaders will begin to ask the inevitable question: ‘How Did we get here and who is the ultimate beneficiary’ of this ‘my last term’ forced down our throats? We must stop it now!

The writer is a senior journalist, Editor of The National Tribute Newspaper, a columnist with Modernghana.com and an activist of the National democratic congress (ndc). Contact; [email protected] or 0249726262