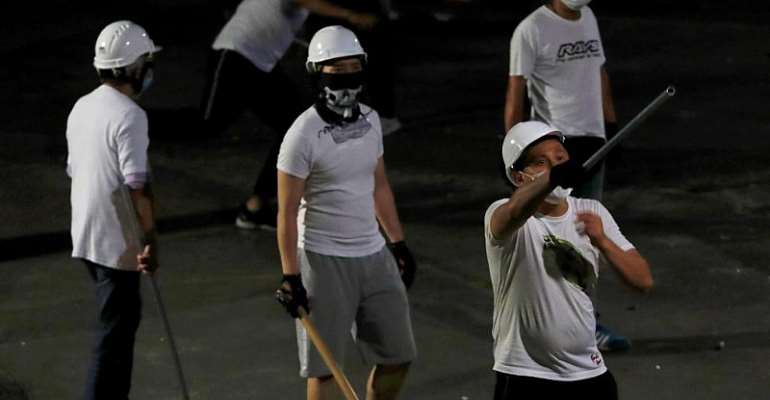 Anger soared in Hong Kong on Monday over an assault on pro-democracy protesters by suspected triad gangsters that left dozens of anti-government demonstrators injured.

"Regarding organisations like the triads in Hong Kong, as long as these people are patriotic, as long as they are concerned with Hong Kong's prosperity and stability, we should unite with them."

He went on to say that “our public security organs have broad links and ties with different strata in society, including such groups" and recalled how, when an unnamed Chinese state leader paid an overseas visit, the Chinese Secret Service was helped by “800 triad members to guard our state leader against any danger”.

China later played down Tao Siju's statements, but today in Hong Kong, there is not much doubt that links between triads and Beijing are still firm.

Lam Cheuk-ting, a pro-democracy lawmaker, was one of those wounded in the weekend violence, sustaining lacerations to his face and arms.

He criticised police for their response and accused "triad members" of being behind the attacks.

Furious fellow pro-democracy lawmakers held a press conference on Monday where they accused the city's pro-Beijing leaders of turning a blind eye to the attacks.

"This is triad gangs beating up Hong Kong people," fumed legislator Alvin Yeung. "Yet you pretend nothing had happened?"

“Nobody is admitting precisely who these people were and who had organised them," says veteran China watcher Michael Dillon, author ofChina, a Modern History.

“It was clearly an organised attack."
Underworld secret societies
“What has triggered this off is the demonstration on Sunday on Hong Kong Island which moved to the west of the island and a small group of protestors attacked the Beijing Liaison Office."

According to Dillon, the gangsters may have been part of “underworld secret societies” from Guangdong Province, just over the border with Hong Kong.

“Nobody is admitting to this, but this is what happened and it can only have been done in the interest of Beijing,” he says.

“In other words it's an attack on the protestors. But it is deniable, because Beijing is not going to admit that it is running gangsters against the pro-democracy demonstrators."

According to Dillon, triads originated in the Chinese nationalist movement against the Manchu Empire, which resulted in the Republic after the 1912 revolution.

“They degenerated since and they've got really very little political impact.

“But they are pro-Chinese in a very broad sense of the word, and if they can be persuaded that what's happening in Hong Kong is 'anti-Chinese' they could be mobilised against what can be seen as the anti-Chinese demonstrators."

Chinese governments in the past are known to have used triads for politcal purposes.

“So it is rather ironic if the Chinese state now is using similar triads to attack its own opponents."